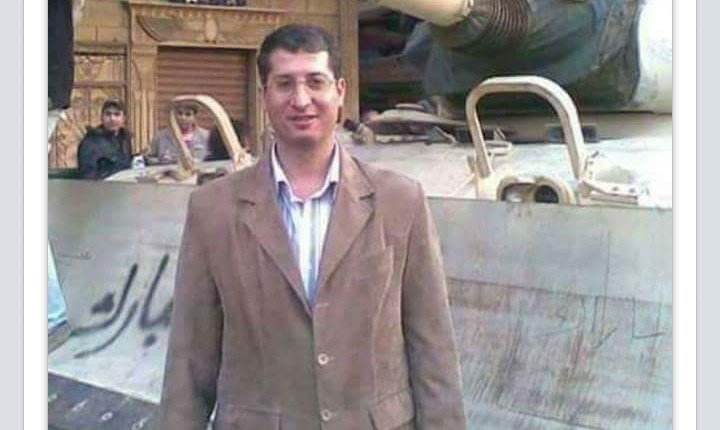 Emad Hassan, a prisoner at the Tora detention facility, died on Friday in what family members and activists have called wilful neglect by prison officials in providing adequate medical care to prisoners. The comments come in light of  a recent National Council for Human Rights (NCHR) report which gave an uncritical review of the controversial facility.

Photos, which circulated online after Hassan’s death, show the severely emaciated body of the inmate, who was being held at the prison’s Al-Aqrab (Scorpion) wing, following his death at Qasr Al-Eini hospital on Friday.

The 41-year-old  father-of-four was arrested at his home in August 2014. He worked as a chemist and lived with his family in Helwan.

“Before prison he was not ill, after six months he had a medical check and they didn’t report he had cancer, but after Ramadan, he started bleeding [and it was] then they transferred him to Tora hospital,” Hassan’s wife told Daily News Egypt. “Even then, they didn’t say what his condition was.”

Hassan’s wife added that by then, he had lost so much weight he had become skeletal and was being drip-fed, having not eaten or drank properly in three months.

“They were only reporting that he had stomach issues, like a virus, then after we eventually got him transferred out of prison to Qasr Al-Eini hospital they said he had stomach cancer. By that point it was too late, getting all the permissions from the prison took so long that he died when the cancer spread to his lungs,” she said. “It was his destiny but negligence was a large factor in this.”

According to his wife, Hassan was first involved in a “normal” case of rioting and protest, before he was added to another case six months into his detention. She said that this was the trial of 215 individuals accused of membership of the ‘Helwan Brigades’ armed militant group.

Speaking on one particular officer, a Brigadier General in charge of the Tora Prison hospital, Hassan’s wife said that patients are treated like prisoners, and that “they deny them visits and items from the family. He threatened to deny treatment Hassan treatment if we did not stop trying to visit him”, she said.

In August, a NCHR delegation which visited Tora Prison claimed they witnessed no major violations of prisoners’ rights during their visit. The delegation made only minor recommendations, including changing old beds and creating a shaded area for families queuing to visit.

The NCHR delegation had visited the complex following numerous reports of violations and deaths. In August, Essam Derbala, a former Al-Jamaa Al-Islamiya leader, died due to what the group called intentional neglect of medical care. The authorities, however, argued that his death was caused by a sudden drop in blood pressure. Muslim Brotherhood member Farid Ismail also died amid similar accusations of intentional neglect.

Various NCHR members, however, criticised the visit and the way it was organised. Mohamed Abdel Qodous, an NCHR member who was part of the delegation, added that the prison administration knew of the visit beforehand and prepared for it appropriately.  He wrote in a public statement: “For example, the prisoner’s family would obtain a visit permit and the administration registers it in the logs, then prevents the family from entering the prison.”

Speaking on the NCHR’s Tora report, Emad Hassan’s wife told Daily News Egypt: “[The report was] completely different to reality, something out of imagination. The food and water they give them is almost unsuitable for human consumption. The food and water aggravated [Hassan’s] conditions and it was in small portions, they wouldn’t take food from the families.”

Various bodies, including the Egyptian Coordination for Rights and Freedoms (ECRF) and the Muslim Brotherhood’s Freedom and Justice Party (FJP), said Hassan’s death is one of many that occur in Egypt’s prisons. The bodies added that these deaths point the finger at intentional and systematic medical negligence on the part of prison authorities. The ECRF criticised the “flimsy” reasoning provided by the Ministry of Interior for not transferring Hassan to an appropriate hospital earlier on security grounds.

A Ministry of Interior official was not available for comment at the time of publishing.

'The situation in Egypt is awful,' says top EP member