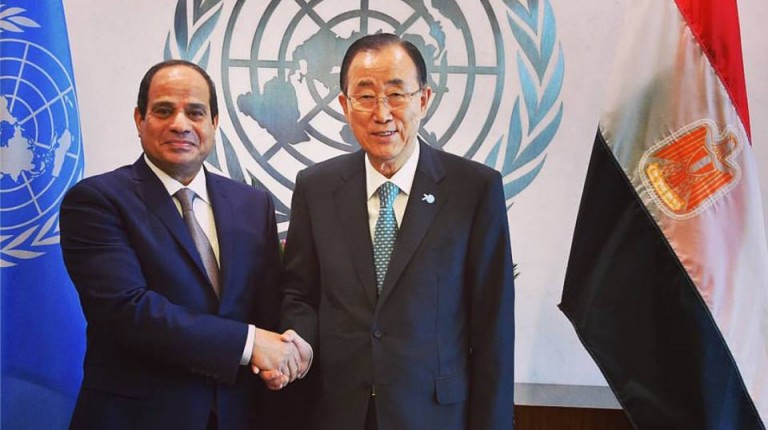 Ban said that climate change is a component in the UN’s development agenda, and expressed faith in Egypt’s capability to demonstrate the African stance on the issue at the upcoming United Nations Framework Convention on Climate Change (UNFCCC) conference in Paris.

Al-Sisi emphasised Egypt’s interest in the post-2015 development agenda, mentioning the country’s national developmental strategy which will run until 2030, according to a presidency statement.

On Friday, Al-Sisi delivered a speech at the UN Sustainable Development Goals (SDG) summit, held in the presence of delegations from at least 190 countries. During the summit, Al-Sisi opted to shed light on “other challenges which hinder development”, such as terrorism, which he said has become an international phenomenon.

Al-Sisi and Ban also discussed a variety of topics, including the peace process in Palestine, and support for the UN’s efforts in forming a unity government in Libya.

In a separate meeting with his Senegalese counterpart, Al-Sisi also discussed cooperation on various African issues of concern.

During the meeting with Sall, Al-Sisi affirmed the importance of the “African dimension” in Egypt’s foreign policy, revealing Egyptian interest in contributing to supporting the execution of Senegal’s national development plans.