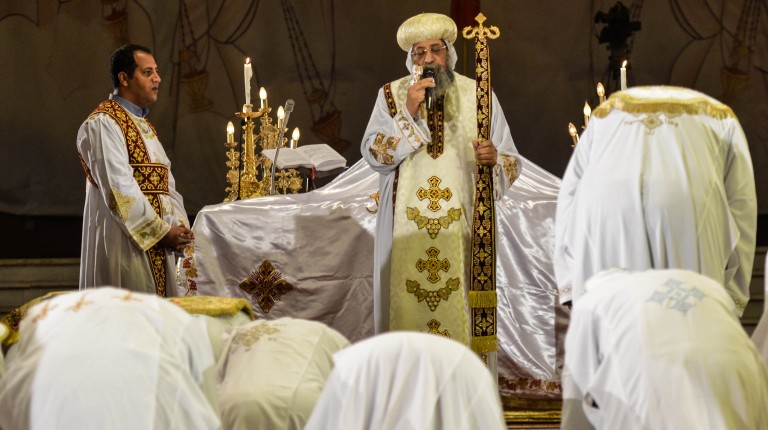 The Head of Egypt’s Coptic Orthodox church, Pope Tawadros II, met with Ethiopia’s Foreign Minister and Egypt’s Ambassador to Ethiopia Sunday as part of his five-day visit to Ethiopia.

In the first visit of its kind, which the Coptic Church referred to as “historic”, the Pope participated in the celebrations of a Christian festival, state-owned newspaper Al-Ahram reported.

Pope Tawadros II met with Egyptian Ambassador to Ethiopia Abu Bakr Hefny, and discussed the historical relations between the two states and their respective churches. The Pope also met with Ethiopia’s Foreign Minister Tedros Adhanom. Ethiopian Orthodox Tewahedo Church Patriarch Abune Mathias I was also in attendance, in addition to Hefny and the Ethiopian Ambassador to Egypt, Mahmoud Dreir.

As part of his visit to the country, Pope Tawadros visited the Sebeta Getesemani Nunnery, and is expected to visit many of the most important cathedrals and monasteries in Ethiopia, including the Holy Trinity. He is also scheduled to take part in the inauguration of the Coptic Canadian Hospital.

During the celebrations, Pope Tawadros expressed his admiration of the festivities, adding that communication and cooperation between the region’s countries should be encouraged, as well as any “developmental projects” initiated by those countries.

When asked about the Coptic Orthodox Church’s role regarding Egypt’s water security, the Pope stressed that his visit aims to consolidate ties between both churches. He emphasised that his visit is unrelated to ongoing discussions regarding the Grand Ethiopian Renaissance Dam (GERD).

In an interview with Egyptian state-owned newspaper Al-Ahram, the Pope further stressed that no particular assignments were allocated by President Abdel Fattah Al-Sisi to the delegation ahead of the visit.

Prior to his Ethiopian visit, Pope Tawadros visited Denmark and Sweden before returning to Cairo on Tuesday, a few days before the current visit. The Pope is also expected to visit the US in mid-October.

Patriarch Mathias I visited Egypt earlier this year, where he was received in St Mark’s Cathedral in Abbaseya. The visit witnessed discussions on the GERD, with the Patriarch stating that Egypt should be “at ease with the development of its brothers”.

Meanwhile, Al-Sisi held talks with Ethiopian Prime Minister Hailemariam Desalegn on the third day of his visit to the US.

Al-Sisi stressed the need to speed up the implementation of the “technical procedures” agreed upon in the Declaration of Principles on the GERD signed by Egypt, Ethiopia and Sudan in March.

Desalegn confirmed his government’s commitment to the agreement’s implementation, adding that the issue will top the new government’s agenda, which is planned to begin operation on 4 October.

Egypt’s former minister of irrigation, Mohamed Nasr, said that “there are no updates” on the developments in the recent GERD negotiations.

Based on a Sunday presidential spokesperson’s statement, a meeting between the irrigation ministers will be arranged for early October, to discuss future plans and their implementation.

“We have come to the conclusion that the technical route is the only route possible to take in this issue,” said Nasr. “In a sense, this is a return to previous policies.”

During their meeting, Desalegn stated that the GERD’s main target is to fight poverty and realise development and prosperity. He pointed out that the dam will be a “symbol of cooperation” between Egypt, Ethiopia and Sudan.

Tripartite negotiations, which began earlier this year, aim to reach the governing principles of cooperation and to safeguard the interests of the three states.

The dam, which Ethiopia is currently constructing along the Nile, has been a point of contention between Egypt and Ethiopia, with the former fearing that it will affect its share of Nile water.

Al-Azhar to give lectures to counter ‘extremist ideologies’

20 arrested in Minya after deadly violence

AU delegation to meet with stakeholders in second visit