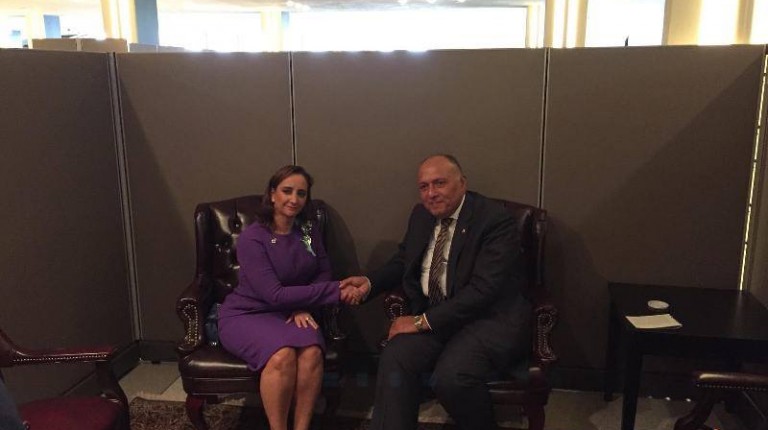 The meeting came on sidelines of the 70th United Nations General Assembly (UNGA), which is currently underway in the US city.

Both the Egyptian and Mexican sides agreed that Egypt’s embassy in Mexico must follow up on communications made with the Mexican Secretariat of Foreign Affairs and the families of injured individuals regarding the results of the investigations.

“Egypt is in solidarity with Mexico, and extends its sincere condolences to families of the injured and deceased,” the statement read.

Shoukry also met with Chairman of the Libyan Parliament, Oqaila Saleh, on the sidelines of the meetings at the UNGA.

Discussions between both parties involved evaluating the path of the Libyan national dialogue and the obstacles that could hinder the formation of a national accord government that is supported internationally and able to fight against terrorism in Libya.

Shoukry emphasised that Libya’s stability and security is important to Egypt’s stability, and stressed the importance of speeding up the formation of the national accord government of parties that have agreed to participate in the dialogue.

Saleh said the Libyan Parliament is committed to its re-involvement in the dialogue, but added that the representatives of the Tripoli government refused to sign the initial agreement in July. Saleh said this is now creating more obstacles by requesting modifications to the contract’s text, according to a ministry spokesman.

Shoukry also headed the Egyptian delegation at the Arab Foreign Ministers’ meeting in New York. He discussed the situation in Palestine and developments in the Libyan crisis, as well as coordination regarding the Arab position at the UN and its respective bodies.

During the meeting, Arab foreign ministers approved the statement prepared by Egypt and Palestine regarding the recent events in Jerusalem. The statement condemned Israeli practices in East Jerusalem, and requested that the UN Security Council take responsibility for them, the ministry spokesman said.

Arab foreign ministers also issued a statement of condolences to Saudi Arabia regarding the recent stampede which occurred at the end of the Hajj pilgrimage, according to the Foreign Ministry statement.