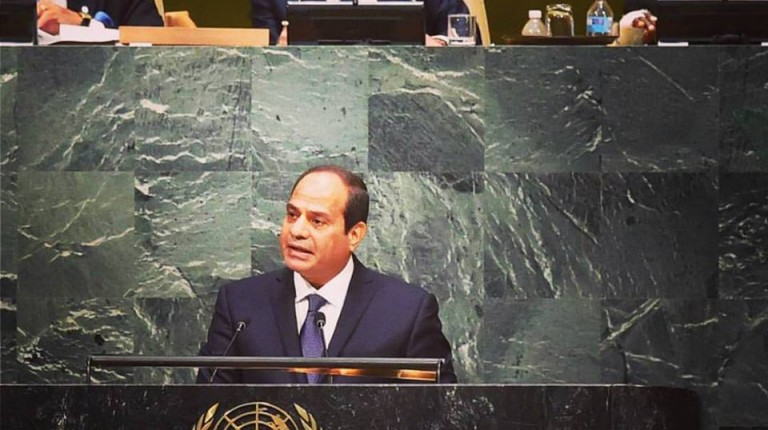 President Abdel Fattah Al-Sisi said Egypt will continue its ruthless confrontations with Islamist extremists, during his speech at the 70th United Nations General Assembly, in the presence of at least 190 other heads of states and governments.

In his speech, Al-Sisi started by reviewing Egypt’s development progress, highlighting the New Suez Canal inauguration and the importance of working together against “terrorism”.

“Egypt’s efforts in talks with Libya was the main reason behind the UN Security Council’s resolution to its crisis,” he said.

Regarding Egypt’s participation in the Saudi-led coalition in Yemen, he said: “Our military support in Yemen came in response to Yemen’s government and from our responsibility to protect the country’s independence.”

Al-Sisi further mentioned the Syrian opposition conference held in Cairo to unite opposition forces as one of Egypt’s main achievements of in addressing the Syrian civil war, currently in its fifth year.

Furthermore, he noted that “what is being witnessed in Palestine nowadays means peace talks still face many obstacles in order to achieve Palestinians national independence”.

On the sidelines of the General Assembly, Al-Sisi met with world leaders from Senegal, Mali, the Netherlands, and India, among others, to discuss bilateral issues and potential cooperation for investment.

On Sunday he met with UN Secretary-General Ban Ki-moon, where he expressed Egypt’s interest in the post-2015 development agenda, highlighting the country’s national developmental strategy, which will run until 2030.

Al-Sisi also met with other leaders, including German Chancellor Angela Merkel, where he emphasised Egyptian-German relations, and noted the “positive role German companies have played in Egypt’s development by working to implement projects as quickly as possible.”