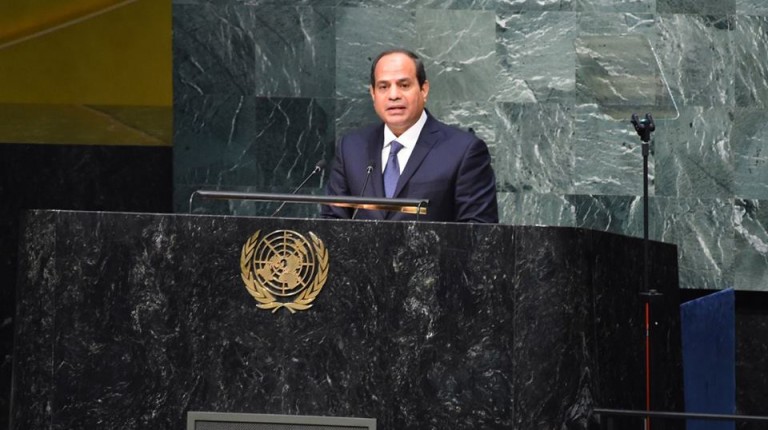 President Abdel Fattah Al-Sisi said Egypt enjoys more extensive freedom of expression than ever before, as he attends the United Nations General Assembly in New York.

Critics, however, have called on political leaders not to be ‘fooled’ by empty promises.

In an interview on the US television network, CNN, on Monday, Al-Sisi said: “I do not want to exaggerate, but we have unprecedented freedom of expression in Egypt. No one in Egypt can bar anyone working in media or journalism or on TV from expressing their views.”

The president added that no one in Egypt under his presidency has been prosecuted for expressing their views.

Meanwhile, also on Monday, international rights group Amnesty International warned the international community not to be “fooled” by Al-Sisi’s “veneer of reform and empty promises”.

Referring to the 100 activists and journalists pardoned by Al-Sisi before his visit to the UN, Amnesty wrote: “Most of those pardoned by President Abdel Fattah al-Sisi should never have been locked up in the first place, because they were peacefully exercising their rights to freedom of expression and assembly.”

The rights group called on Egypt to implement meaningful reforms to release the “hundreds detained solely for exercising their rights to freedom of expression and peaceful assembly”.

Al-Sisi also spoke on regional matters and security, re-iterating the need for more arms for its counter-terrorism operations from the US.

Asked directly on Egypt’s policy towards the Syria crisis, Al-Sisi did not explicitly say he wanted to keep Bashar Al-Assad in power, but put forward militant groups as a more direct concern. “What I hope for Syria is that the statehood does not fall completely in to the hands of extremists and terrorists. I hope that the army does not completely collapse and its weapons and ammunitions fall in to the hands of extremists. I do not want to see the country dismantled.”

“I have my eye on the real danger, Bashar and the Syrian opposition is something that can be handled and managed. What cannot be handled and can get out of hand and be devastating to the country is that the whole country falls into the hands of these terrorist groups, because this will have a direct detrimental impact on the security and stability of the whole region,” Al-Sisi said.

Asked on Egypt’s position regarding the Iran nuclear deal, Al-Sisi said that he is “with any action that will reduce tension and drive away the spectre of war from this region, [as] this region has enough problems. Now and [in] the coming years, the most important thing about this deal is that it does not have a negative impact on Arab regional stability.”