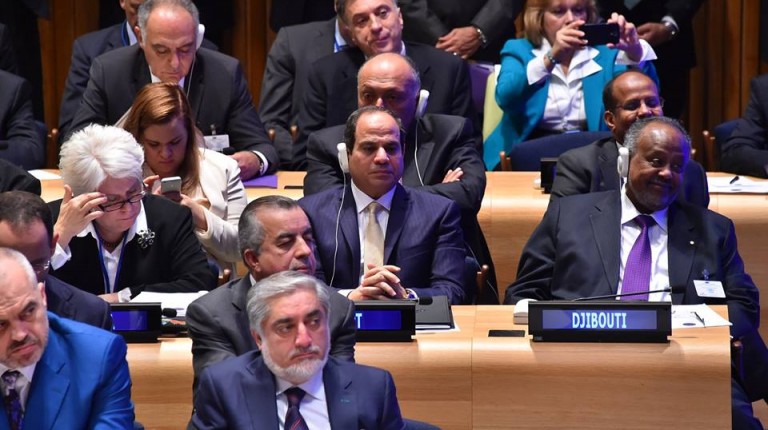 President Abdel Fattah Al-Sisi’s comments on press freedom during his trip to the United Nations General Assembly have continued to cause controversy back home in Egypt, where civil society bodies say the facts on the ground give the lie to his claims.

In an interview on Monday with US television network CNN in New York, Al-Sisi said: “I do not want to exaggerate, but we have unprecedented freedom of expression in Egypt. No one in Egypt can bar anyone working in media or journalism or on TV from expressing their views.” He continued that no-one under his presidency has been prosecuted for expressing their views.

Critical human rights bodies and activists have denounced the claims, highlighting the numerous cases of ‘spreading false news’ convictions as one example. The government’s line is that if journalists are imprisoned, it is for convictions unrelated to their field of work.

“He says that press freedom has increased, but the only thing that has increased is the lying – the statements are now just more blunt,” said Gamal Eid, director of the Egypt-based Arabic Network for Human Rights Information (ANHRI) in comments to Daily News Egypt. “We all know very well the number of papers confiscated and the numbers behind bars.”

In an article in Tuesday’s edition of leading newspaper Al-Masry Al-Youm, the ANHRI has provided the names and periods of the detention of 60 individuals who Eid says are the living rejection of Al-Sisi’s international messages.

Eid’s claims that Al-Sisi is being less than truthful about the reality in Egypt have been backed up by bigger names on the international stage. On Monday, Amnesty International warned the international community not to be “fooled” by Al-Sisi’s “veneer of reform and empty promises” at the United Nations.

Referring to the 100 activists and journalists pardoned by Al-Sisi before the General Assembly, Amnesty wrote: “Most of those pardoned by President Abdel Fattah Al-Sisi should never have been locked up in the first place, because they were peacefully exercising their rights to freedom of expression and assembly.”

The rights group called on Egypt to implement meaningful reforms to release the “hundreds detained solely for exercising their rights to freedom of expression and peaceful assembly”.

Like incidents of media censoring, precise figures on the number of journalists behind bars in Egypt are not known without some level of doubt and debate.

Unlike ANHRI’s figure of 60, the Press Syndicate’s Freedoms Committee puts the figure at around 32. A research by the international Committee to Protect Journalists finds that there are 18 journalists in Egyptian jails.

For Eid, both groups’ lower figures are based on a wrong approach to the question. “The discrepancies are for numerous reasons. Firstly, because the Press Syndicate has a problem with journalists who are not registered members of the syndicate. We also have names on our list that I do not think the syndicate or the CPJ know about yet.”

Eid continued: “The CPJ and syndicate use a kind of a backwards logic. They say that the journalists need to prove they are journalists and that the charges are somehow related to publishing. We say it should not be like this, it is not appropriate because in the climate we are in the government is arresting and charging journalists on trumped-up, empty and unrelated charges. So therefore we treat them all as journalists.”

“For example, with Shawkan we were saying for almost a year that he was a journalist before the syndicate decided to recognise him as such,” Eid said.

Head of the Freedoms Committee at the Press Syndicate told Daily News Egypt he was not available for comment when contacted.

On Tuesday, the CPJ held a press conference for the three Al Jazeera journalists who were convicted in absentia in the famous ‘Marriot Cell’ case. They include Sue Turton, Dominic Kane, and Peter Greste who was deported before the final verdict in the case. Al-Sisi’s pre-UN pardons for Mohamed Fahmy and Baher Mohamed leave these three journalists still convicted.

The journalists are now appealing to have their convictions for “tarnishing Egypt’s image” and aiding the Muslim Brotherhood lifted. They say that the convictions mean they cannot travel to certain countries that could extradite them to Egypt, making their work difficult. Greste told the conference he still does not feel free, despite having left Egypt and Turton says she gave up her correspondent job because she could not travel freely.

“Quashing the convictions of these journalists will not address the plight of journalists in jail or under threat of imprisonment in Egypt. But Al-Sisi’s pardons and his comments… suggest an admission of injustice,” said the CPJ. “The pardons are a first step on a long road of reform before the president can be taken seriously on his promise at the United Nations General Assembly Monday to further the realisation of Egypt’s aspirations for freedom, dignity, and social justice.”