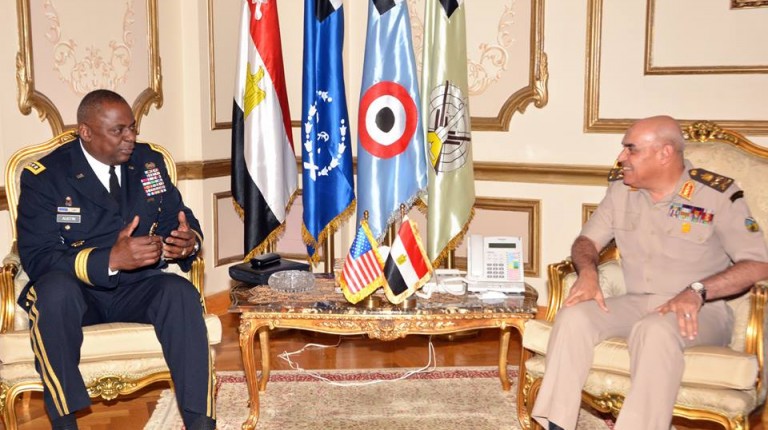 Minister of Defence and Military Production Sedki Sobhi met with General Lloyd Austin, commander of the US Central Command, and his accompanying delegation, currently visiting Egypt.

The meeting discussed a number of files and issues related to the areas of military and security partnership and cooperation between the armed forces of the two countries, in light of the growing US-Egyptian military relations. They also discussed regional and international efforts and attitudes towards the “war on terrorism”, and the latest developments in the region.

Austin expressed his appreciation for Egypt and its central role in maintaining security and stability in the Middle East, as it represents a strategic weight in the region. He further affirmed the US’ support for Egypt in its “war against terrorism” and its aspirations towards construction, security and development.

For his part, Sobhi affirmed his appreciation for Egyptian-American military relations, which have extended over decades of mutual cooperation in many fields. He further commended the US’ good understanding of Egypt’s current actions to build the foundations of peace and stability in the Middle East. Sobhi stressed Egypt’s keenness to strengthen and develop these relations to serve the common interests of both countries.

The meeting was also attended by the armed forces Chief of Staff General Mahmoud Hegazy, and number of senior armed forces commanders.