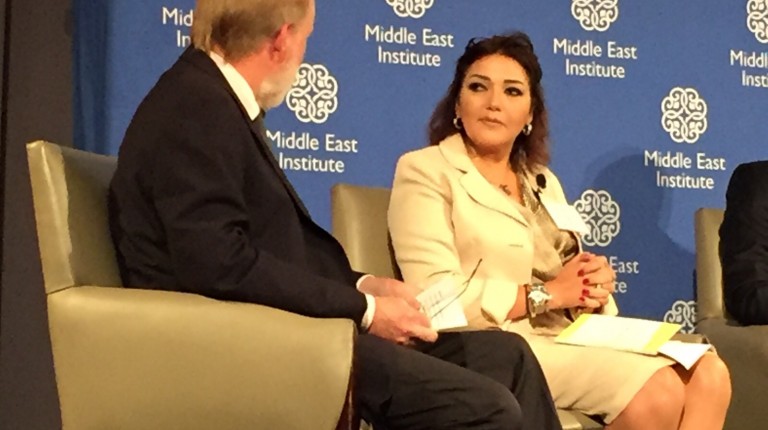 Egyptian politician and media figure, Gameela Ismail gave a speech at the Middle East Institute conference held in Washington DC Wednesday, entitled “Politics vs security: Setbacks and opportunities in Egypt”. Below is the full text of the speech.

Thank you Doyle, thank you all, panellists, organisers of this conference, attendes, the Middle East Institute, Kate Seeyle, Mark Scheland and Ambassador Chamberlin.

It is an honour, and a great panel here. Some people I see on Twitter, and some I know and met right in the middle of Tahrir Square.

The question which this panel revolves around is, I think, interesting and sensitive, and falls exactly into why perhaps several parliamentary candidates, myself and the democratic post -revolutionary movements and political parties decided to step back and disengage from the upcoming elections, parliament and maybe from the whole political scene for the moment.

I have a request, though, from the media or anyone covering this event before I go ahead, to be a little careful with the context.

Given the complexity, uncertainty, and ambiguity of the whole situation, and trying to grapple with the big picture of Egypt’s politics/security before speaking today, and trying to know where Egypt is going, I resorted to the short masterpiece by the French philosopher Edgar Morin, entitled “Ou va le monde?”

Morin presented complex thought as a way to overcome the crisis of the present – and eventually the future – and stresses on the importance of retreat at times of uncertainty, as well as solidarity.

[There are] feelings of deep hatred, the desire to retaliate… but the majority of players know that its not the right time for a collision, in the middle of the deep ocean, because the shell will scatter into pieces. Maybe later, when we land somewhere… but not now.

Morin presents in his book an exit to this crisis, saying: “As long as we are lost in this universe, suffering and trying to survive, we ought to co-exist as long as we can, not necessarily in solidarity.”

So we are all stuck on this shell, knowing that nothing will come about with a knock out, and together with us is a very wide stream of the population, who want to live a better life, in a beautiful country with the best water fronts and environment ever, and a strong creative younger generations (that I’m very biased towards), who deserve freedom, dignity, and a smile on their faces for the rest of their lives.

This wide stream lies in the middle between a legendary monster sometimes labelled by the authorities as terrorism, and some as the Muslim Brotherhood’s desire to return. On the other hand, there is a paranoid dinosaur state that would step over its own eggs or children to eliminate the former in order to save the country and establish stability.

The dinosaur has security, the judiciary, and the media [on its side]. The three genuinely believe that they are guarding Egypt, and would do anything to save the state from the monster’s threat.

If we sat here five years ago and discussed, prior the 2010 elections (in which I ran for a central Cairo seat), trying to foretell the future, we would have been caught between only two options in one question: Who will win? The son (Gamal Mubarak), or the fox: meaning General Omar Soliman? Who will hold the country’s fate out of the two? No other names, parties, players.

We talk today, while Mubarak is in medical imprisonment, about a future and five years of struggle without him, between experimenting with hope and pain.

On 25 January, the regime did not really fall, but was scattered and fragmented into little pieces. When people went out to the streets, the old deep state decided to back them because simply it was against Gamal, and his new trend against the old state’s candidates.

On 30 June there was a temporary coalition, between the people who wanted change and the state. The security-backed wing won because of the nature of the opponent, then started to export its speech, which stressed in different ways that stability can only happen when the original form of the state returns.

People started giving up their demands for their rights in return for stability against the legendary monster that comes with a different name every time; once as terrorism, and once as the Muslim Brotherhood. A big mix up took place between “defending the national security” and retaliation, and confusing people by the fact that stability means the return of old interests and benefits.

The return to Mubarak’s “patron”, without Mubarak and his direct political tier, yet adopting his patrons in the elections, where money and close connections with the authorities and maybe support from the old tribes or families that were represented under Mubarak is the decisive factor for a candidate, even if he lacks any political experience.

Lacking political experience or weight, and being unrelated to any political party is an excellent privilege for the authority, which, despite all its attempts of control, still fears any anomalies in a parliament, which is intended to be very homogenous.

So, we have a new layer of politicians now, with no political or legislative background, selected and introduced by the authority, in a list that is prepared by a security expert, Sameh Seif El-Yazal, under the name of “In the love of Egypt”.

The list was the dream of most candidates and parties, ruling and opposition, that were represented during Mubarak and a couple of new post-revolution liberal parties. It is being marketed as the main, state-backed, patriotic list that will run for stability and save the country from terrorism and from other candidates who might be disguised to serve the Muslim Brotherhood.

Other political parties born with or after 25 January, and which represent the democratic trend, boycotted or withdrew from the elections for several reasons, including the elections law, unfair elections administration, financial disability and security intervention.

In addition, promising and rapidly growing parties with wide bases of young members, such as Al-Dostour Party, were targeted and trapped for several months in the dilemma of detentions of members, which made parliamentary elections a luxury they could not afford.

The upcoming parliament, in this sense, will have no majority formed by a political party, and will not be representative of the different layers of Egyptians. A bloc of a new trend of politicians will be formed, whose positions will range between extremely supportive of the president’s decision, very supportive, or supportive.

Will the list of “In the love of Egypt” succeed, as promised to the voters, in the goals of sustaining stability and decisively defeating terrorism?

Will this trend of new politicians win the trust of their voters by providing a better life through this parliament?

Will this parliament succeed in overcoming Mubarak’s “patronage” in the following elections?

Will the new democratic political parties survive outside the parliament?

Will we be able to build our parties internally and find spaces to move and provide initiatives and projects to assist society to enrich the fragile shell from inside, if we, at the moment, cannot break it?

Will the regime, on the other hand, allow margins for the parties to operate outside the parliament?

Would the dynamic minority that led to the big change in Egypt’s history help the wide stream of silent Egyptians waiting to express themselves amid the two previously mentioned teams?

How long will we have to sit amidst the crossfire between the paranoid dinosaur state that wants to eliminate any different tone, and the Muslim Brotherhood who are hysterically obsessed with how to retaliate and regain the lost political opportunity.

Does the regime genuinely want elections? Or believe in the parliament’s role? Or is it “pour la forme” to continue the road map?

Would we, the makers of the historic moment of January 2011, be able to succeed politically as we did in Tahrir… away from complaining, whining and feelings of bitterness, and introduce initiatives and projects that can make Egyptians’ lives happier?

And finally, Egypt is not what you see here… it is not all about terrorism and military operations. Its a wonderful country, with a beautiful energy. Try to travel to Egypt more often and encourage your people to do so.