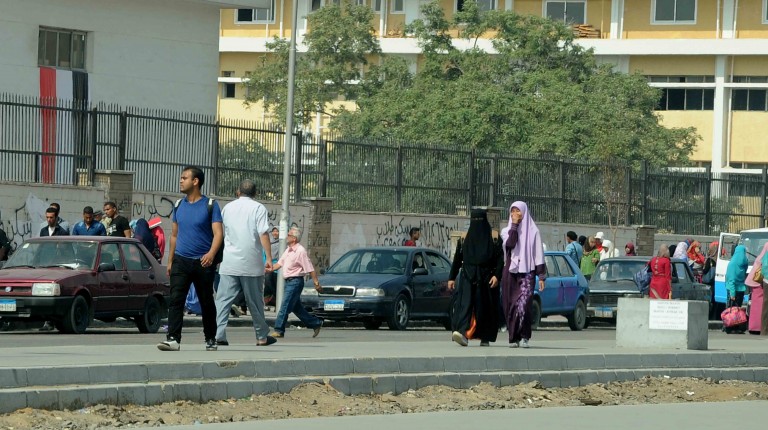 Al-Azhar University has boosted its security measures during the first week of the academic year 2015/2016 that started on Saturday.

On Saturday, students found difficulty entering lectures because they had to wait in long queues for inspection.

President of the university, Abd El-Hay Azab, warned the students against organising demonstrations. In a televised interview, Azab said he will not allow a single student to “throw a stone” on campus.

During the last academic year, Al-Azhar University, Egypt’s oldest higher education institute, witnessed frequent clashes between students and security forces. The campus dormitory is reported to have witnessed some arrests by security forces.

A spokesperson for the Students against the Coup (SAC) movement said Sunday that security forces are “paranoid”, and that many protests are planned inside campuses. She added that students are harassed at the university entrances by university security personnel, who prevent the entry of many personal belongings.

“Why should a university be surrounded by riot police? Why should there be police informers between students?” she said, adding that flash protests and silent demonstrations will continue, to “defy the coup regime”.

The SAC has been active in many Egyptian universities since the forced ouster of Islamist president Mohamed Morsi in 2013.

At the beginning of the previous academic year, the Ministry of Higher Education contracted with Falcon Company, a private security firm entrusted with maintaining security at university gates, to secure several public university campuses, including Al-Azhar University.

In November 2014, at least 23 students were expelled from Al-Azhar University for their alleged implication in acts of on-campus violence, according to the university’s media centre.

During the same month, a Cairo court sentenced 100 students from Al-Azhar University to five years in prison, on charges of protesting inside campus without permission.

In December, the university expelled 71 students for allegedly participating in protests and “rioting on campus”.

In April 2015, the Association for Freedom of Thought and Expression (AFTE) reported that police forces stormed Al-Azhar University’s campus (girls’ branch) more than once.

11 demonstrators arrested for protesting without a permit released on bail