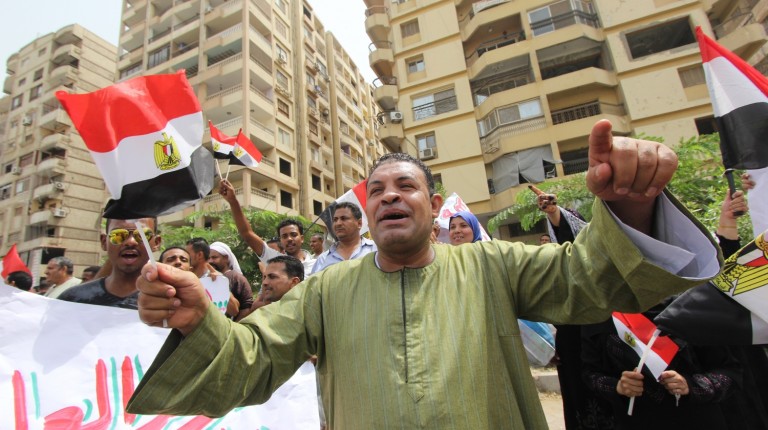 The month of September witnessed the occurrence of 89 protests carried out by various political groups, as well as 20 terrorist operations across Egypt, according to a report by the Arabic Network for Human Rights Information (ANHRI) released Monday.

Protest activity was divided among various political factions; with the outlawed Muslim Brotherhood and the Islamist Anti-Coup Alliance responsible for 82% of these activities. The remaining was carried out by workers and students, while one event was organised by pro-government groups.

The Brotherhood’s activity was mostly against the practices of security forces, and the prevalent social and economic conditions. The group also called for retribution for those killed in protests and during the violent dispersal of the Rabaa Al-Adaweya and Nahda Squarre sit-ins in August 2013, and the release of detainees.

The report showed that 30% of the Brotherhood’s activities were ambushed by security forces.

As for the protests carried out by workers, they included teachers demanding salary raises, doctors’ striking to protest the detention of two colleagues and the rejection of the civil service law.

Three out of five protests by students were ambushed by security forces, according to the report.

The beginning of the month also witnessed the opening of candidate registration for the upcoming parliament. The human rights group mentioned that complex procedures have affected competiveness in the process, for example the decision to repeat the medical checkups for candidates at their own expense presented a burden.

The second section of the report focused on the trials that took place throughout September. During the month, 35 death sentences were issued in different cases; the latest of which was given to Adel Habara. Additionally, five trials were being adjudicated in military courts, with 387 defendants.

The report commented on the recent presidential pardon given to 100 prisoners, including several activists, saying that the decision lacked standards upon which the pardoned prisoners were chosen.

The monthly report was released by the Lawyers for Democracy Initiative, launched by ANHRI in 2014, and consists of a group of lawyers across different governorates and cities in Egypt. The initiative aims to monitor events, cases and incidents, such as protests, conferences, strikes and official and non-official practices that affect the democratic path in Egypt.