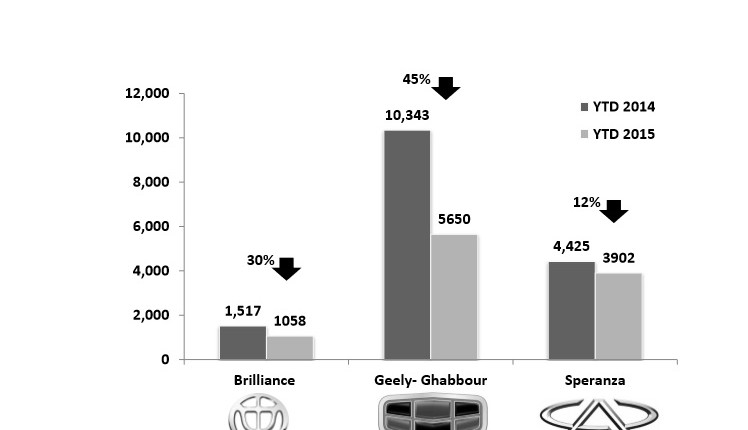 China’s automotive sales declined by 35% from between January and August this year, compared to the same period of 2014.

The Automotive Market Information Council (AMIC) said that Chinese car sales lost more than a third of its total sales achieved during the first eight months of 2014, as Chinese car agents sold only about 10,600 cars this year, compared to 16,300 cars last year.

According to AMIC, Geely’s bad sales performance jolted the market in its category, as all of its sales dropped from 10,300 cars in the first eight months of 2014 to about 5,600 cars during the same period in 2015, registering a 50% fall.

Geely in Egypt is represented by GB Auto. Geely has several models in the Egyptian market, including XPandino, Pandino, and EMGRAND, which has been receiving a large demand since its announcement in 2012. The EMGRAND has also been witnessing fierce competition on social network sites.

General Manager of Brilliance Bavarian Auto, Khaled Saad, told Daily News Egypt that the continuation of the dollar crisis and its unavailability along with the difficulty of opening letters of credit, has contributed to the sales decline of Chinese cars. He added that agents are suffering to acquire the dollar currency.

He explained that agents buy the US dollar at the black market with 10% more than its original price to be able to meet customers’ demand, which affects the retail price of cars that often crush customers’ hopes.

Saad predicted a continued decline if the dollar crisis continues, in addition to the state’s lack of vision of the automotive sector.

In a related context, Brilliance witnessed a decline of 30.2% in sales rates having sold 1,058 cars during the first eight months of this year, compared to last year when the company sold 1,517 cars during the same period.

Delayed salaries in Aboul Fotouh Automotives, Speranza’s authorised agent, resulted in the declining performance of the car in the Egyptian market, where sales of Speranza registered a decline of 11.8%, having sold 3,904 cars from  January to August of this year, compared to 4,425 sold cars during the same period of 2014.

Meanwhile, GWM was not able to sell a single car in 2015.

Asian and US cars have also been suffering. American car sales dropped by 2.5% compared to last year, where 16,900 cars were sold, verses 17,400 cars last year. Asian models dropped as well from 1,000 sold cars last year to only 605 sold cars this year.