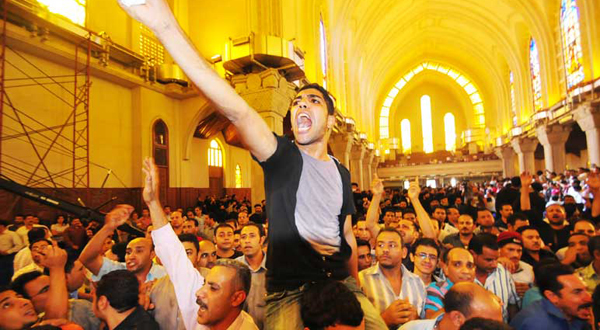 In Coptic tradition, the Coptic Orthodox Church is the Church of Martyrs. The Book of Synaxarium, which narrates the lives of the Church’s saints, recounts that the Coptic Church exists today as a result of its martyrs’ blood. Today, one can see that the annual Coptic calendar is named after those who, according to Coptic belief, sacrificed their lives to keep their faith and to preserve the Christian doctrine.

Next Friday marks the anniversary of the incident of Maspero, when more than 25 Coptic Christians were killed and around 200 others were injured in front of the Cairo state television building amid clashes with the Egyptian armed forces. Although the Supreme Council for Armed Forces (SCAF) conducted an investigation and claimed the army was not at fault, video footage and witnesses indicate that the army ran over many of the demonstrators with tanks, and shot them with live bullets.

While the discourse of martyrdom is a strong pillar in the composition of the Coptic Orthodox Church, remembering the blood associated with the massacre of Maspero seems to be a heavy burden on the memory of the Coptic community in general, and on its clerical hierarchy specifically. This burden appears to have resulted from a fear of fully tackling the “truth”, and/or due to a clash between current and former interests.

In this detailed report, Daily News Egypt attempts to analyse the roots of this burden through tracing the chronology of the events before the occurrence of the massacre until today.

Following the uprisings of January 2011 and the ouster of president Hosni Mubarak, the Coptic community was exposed to a wave of discrimination that paradoxically resulted in its empowerment. Copts moved out of the protection of its clerical hierarchy, and went into the streets to independently express their political demands, and to challenge their social status as a minority.

On 9 October 2011, Copts organised a peaceful march from the Shubra district of Cairo to the headquarters of the Maspero building. The protesters were mainly Coptic Christians, although some Muslims joined in solidarity.

The protests were organised as a reaction to the demolition of the 80-year-old St George’s church in Aswan. Salafis in the region had pushed for the removal of the loudspeakers and steeples from the church, which the Christians had refused.

Discussions had broken down and resulted in a group of men destroying the church. The governor and security forces of Aswan were accused of allowing the demolition to take place illegally, but the governor claimed the church had been built without a permit.

The protest in Cairo ended in the Maspero massacre. Following the events, the Coptic Patriarchate called on Christians around the world to pray and fast for three days to mourn the martyrs. The church’s Holy Synod condemned in a statement what it described as “an attack on Copts”.

A statement released by the Holy Synod after a meeting with the late Pope Shenouda III accused “infiltrators” of fuelling the clashes.

Early in the day, families at the Coptic Hospital debated whether to send the victims for autopsies. While some demanded that autopsies be performed, others objected. Priests at the hospital had attempted to convince families to allow doctors to conduct autopsies, but they refused.

An exclusive meeting was convened to make a final decision, comprised of the Coptic Hospital’s director Moheb Ibrahim Fanous and members of the general prosecution, national security and two priests.

Death certificates were initially issued without the families’ consent, but the family of deceased activist Mina Daniel stormed the meeting and demanded that autopsies be conducted first.

“We want to know what exactly killed our son — an army bullet or a civilian bullet or what?” Mina Daniel’s mother said.

Later on, the Orthodox Church approved the procedure and some families agreed. Those who did not, however, laid the bodies of their loved ones to rest after a mass at Abbasiya Cathedral on Monday.

Some Muslims joined the mass in solidarity.

The hospital itself did not house a forensics department, but it was agreed that personnel would be brought in from the Zeinhom Morgue.

Families of those who were buried earlier said an autopsy will simply be another injustice, citing the case of Khaled Said.

They specifically blamed state television for claiming that Coptic protesters were attacking the army, and urging citizens to go to the streets and protect the armed forces.

By the time four coffins arrived at the cathedral, thousands of distraught Copts had congregated inside and outside, mourning and chanting against the ruling military council.

“We will live and die to protect the cross,” chanted thousands.

As coffins were carried into the church, thousands hailed the victims as martyrs who were destined for heaven.

After prayers, which were led by Pope Shenouda himself, a representative of the Holy Synod read the statement condemning the violence. However, it did not mention the military council, which many Copts who were present believed incited violence against them.

Four months after ousted former president Mohamed Morsi was elected, thousands of protesters marched to the state television and radio building, marking the one-year anniversary of the Maspero massacre.

Protesters held signs demanding the prosecution of high-ranking military officials, including former field marshal Mohamed Tantawi, former chief of staff Sami Anan, and former chief of police Hamdy Badeen. Marchers hoisted posters with their heads surrounded by nooses with the slogan “the ruling of the people” written underneath.

As the protesters reached the state television and radio building, where there was minimal security presence, they continued chanting and sang patriotic songs, led by various leaders from a stage on the back of a truck.

The protesters accused Muslim Brotherhood Supreme Guide Mohamed Badie and then-president Mohamed Morsi of “stealing the revolution” and turning a blind eye to crimes committed by the SCAF.

The Maspero massacre’s second anniversary arrived three months following the ouster of Mohamed Morsi, which put an end to the Muslim Brotherhood ruling. For many Copts and for the Coptic Patriarchate, the army saved the country from Islamists, with whom the Copts were concerned about their future.

This anniversary did not witness organised demonstrations by members of the Coptic community. Instead, a number of political movements called for a silent protest in front of Maspero in commemoration of the victims. The movements included the Egyptian Social Democratic Party (ESDP), the Social Popular Alliance Party (SPAP), the 6 April (Democratic Front) movement and the Revolutionary Socialists.

Coptic rights group, the Maspero Youth Union, formed a prayer service at Saint Samaan Monastery in Moqattam. The group had said that it would avoid protests and marches in order to avoid friction with the Muslim Brotherhood, which has been staging demonstrations against military leadership in Tahrir Square.

The third anniversary of the Maspero incident came four months after the 2014 Presidential elections, won by Abdel Fattah Al-Sisi. This anniversary was accompanied by a remarkable silence, not only from Coptic social movements, but also more importantly from the side of the Coptic Patriarchate.

Before the elections, the Coptic Patriarchate backed Al- Sisi, who was the then the leader of SCAF and the Minister of Defence.

During an interview with Kuwaiti satellite channel Al-Watan in March 2014, the pontiff acknowledged that Al-Sisi had “sweeping popularity” in Egypt as the “hero of the [30] June Revolution” who had “saved Egypt”.

Pope Tawadros, who has staunchly supported the army-backed roadmap put in place following former president Mohamed Morsi’s ouster, added that Al-Sisi’s “participation in elections is a patriotic duty to the first degree”.

Moreover, the pope criticised Morsi’s presidency and the Muslim Brotherhood, saying they ruled “in the name of religion” while distorting the image of Islam, despite being democratically elected.

In a televised interview in January 2015, Pope Tawadros said the Maspero incident was a ploy launched by the Muslim Brotherhood against the Coptic youth, who were dragged into clashes with the Egyptian army.

Two days following this interview, Al-Sisi paid a historical, unprecedented visit to the Coptic Cathedral during the 2015 Christmas mass service, a step that earned him the admiration of many Copts.

In February 2015, the Copts’ gratitude to Al-Sisi and to the Egyptian army reached a peak after the Egyptian Air Force launched strikes on specific targets in Libya, including camps and ammunition stores belonging to “Islamic State”, following the beheading of 20 Coptic Christian migrant workers in the Libyan city of Sirte.