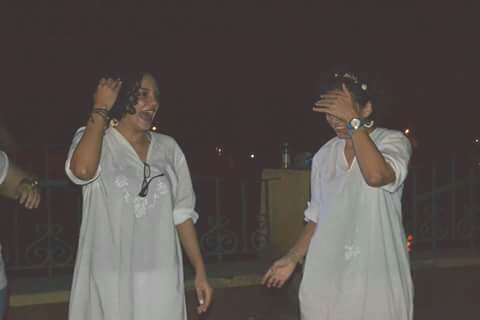 “Did we go to jail for nothing?” This was the recurrent question raised by several former political detainees, recently released under a presidential pardon on Eid Al-Adha.

“We are depressed, because when we got out of prison we realised that nothing has changed,” said Abdullah Zaki.

Zaki was released from Tora Prison, after spending nearly 11 months inside, four of which were in pre-trial detention since his arrest in the Shura Council protests on 27 October 2014. In February 2015, he was sentenced to three years in jail, and three others under probation.

“When I came back to my neighbourhood, I saw that there were no improvements in people’s living conditions, at least in my community. The regime will eventually go away but the question is, will we step up and do something for ourselves or will we go with it?” Zaki said, speaking Tuesday at a conference organised by Al-Dostour Party.

Similarly, another Al-Dostour Party member released in the same case, Hany El-Gamal, said: “We must face our own problems and bear the responsibility of developing ourselves and obtaining our rights,” addressing his fellow party members.

“All I care about after my release is that Al-Dostour Party rises and works on the grassroots. Defending political detainees and calling for the abolition of the Protest Law are still demands we cherish, but that is not all there is to it,” El-Gamal explained to Daily News Egypt.

El-Gamal believes that the current executive power’s oppression on political opposition stems from “ignorance and narrow-mindedness. Alaa Abdel Fattah was not pardoned like the rest because decisions are being politicised all the time, because the regime fears him.”

However, he added that despite the spotlight being on political prisoners, the condition of criminal prisoners is not any different, if not worse. “People are really dying in jail because of ill treatment and negligence. Prison conditions are dire and humiliating,” El-Gamal said.

“The laws regulating pre-trial detention are not applied, and prisoners spend long months in remand pending investigations into their charges. Sometimes, when they suspect criminal prisoners took drugs, they force them to drink the unhealthiest mixture solutions, which often kill some of them,” he added.

El-Gamal pointed out that what he finds disturbing is that the situation in prison has been the same throughout different regimes. “Until now, a diabetic prisoner is at great risk of dying inside jail from negligence.”

Mostafa Youssry, a third former detainee in the same case, also spoke of “doing something for those who remain in jail”. Describing his own and his family’s endurance during his detention, he believes he and the others deserve more than “just a pardon”.

“Nobody did us a favour,” Youssry stated. “Outside and free is what we are supposed to have; prison is not the place for us.”

This comes as human rights lawyers are still struggling to fully implement the presidential pardon issued by Abdel Fattah Al-Sisi on 23 September. Four detainees are still being denied their release from jail by the Interior Ministry.

“Let me tell you that Mostafa and Anany actually walked out with me outside the gates of Mansoura prison, but that police officers immediately caught up with us, taking the girls back to jail,” released 20-year-student Rania El-Sheikh told Daily News Tuesday.

El-Sheikh was arrested on 21 June 2014 in the Itihadiya protest case. “The police began dispersing us five minutes after we started, chasing us, but I did not want to leave my friends behind,” she said.

She was arrested while trying to come to the rescue of one of her friends, along with other 6 April Youth Movement members. For El-Sheikh, the imprisonment was shocking for one particular reason.

“Non-political prisoners were afraid of dealing with us. The feeling killed me because I had been rebelling for the people, who were now not welcoming my presence among them, just because they were told I was dangerous,” El-Sheikh said.

After seven months in Al-Qanater women’s prison, El-Sheikh’s request to be transferred was approved and she was taken to Mansoura prison. “My colleagues communicated with me via letters they would slip under my cell door,” she said in outrage.

El-Sheikh is still a high school student, whose imprisonment cost her two academic years. “But I learnt a lot, and more importantly the experience reassured me that everything I was doing before was right, and that I should keep going,” she concluded.