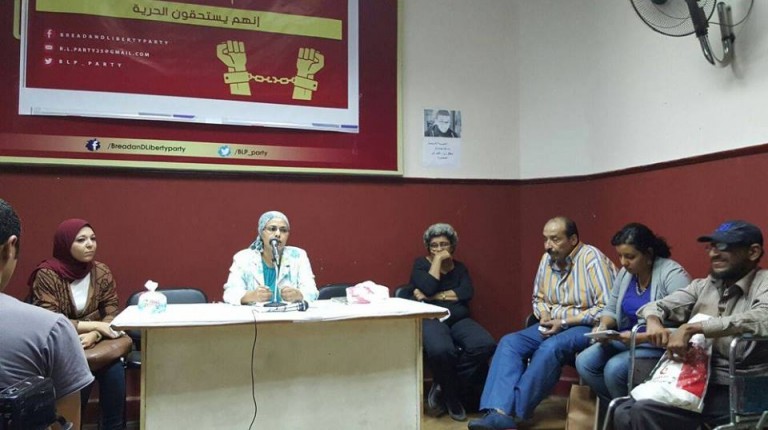 The Bread and Justice Party held a conference Tuesday evening entitled ‘They deserve freedom’ about the status of political detainees in Egyptian prisons, highlighting the issues of pre-trial detention and forced disappearances as causes for great concern.

Speaking at the conference, lawyer Mohamed Sobhi from the Nedal Centre for Rights and Freedoms covered the ongoing phenomenon of forced disappearances of individuals by Ministry of Interior officials. Sobhi said that contrary to the denials of the government, he encountered the frequent disappearance of individuals who later appeared on charges at prosecution.

Despite the positive praise the presidency received from some quarters for the Eid Al-Adha pardons handed to 100 imprisoned activists and journalists, Sobhi said that this does not indicate a new attitude towards political dissent and opposition by the state. Sobhi highlighted that on the day of the pardons, prominent activist Amr Ali, who helped found the 6 April Movement, disappeared to later appear in detention at Tora Prison.

Despite the arrest warrant for Ali having been written for distributing leaflets, Sobhi said that since the prosecution started their investigations, he has been accused of coordinating a secret network, in addition to sabotage, inciting violence and protesting.

Lawyer Sobhi also highlighted the controversial procedure of pre-trial detention that is used to hold accused individuals for 700 days without facing trial, and in some cases individuals are kept beyond that figure itself.

Laila Soueif, the mother of imprisoned activist Alaa Abdel Fattah, said that despite the release of her daughter Sanaa among the Eid Al-Adha pardons, there remain thousands of young people in jail on questionable grounds and they still remain targeted by the government.

Soueif affirmed the urgent need to amend the justice and legal systems and said: “Whoever wants to boycott the parliamentary elections should still go to the ballot box and write on their ballot revolutionary slogans.” Soueif also called for activists to compile a list of the controversial laws to campaign on and when the next parliament convenes there should be work done to amend them. She highlighted the civil service and protest laws as examples.

Prominent press activist Khaled Al-Balshy, head of the freedoms committee at the Press Syndicate, said his work had documented 400 instances of violations against journalists in the preceding year. Al-Balshy said the legal environment has become more hostile recently, and has allowed for further targeting of journalists, imprisonment and fines.

The activist highlighted the anti-terror law introduced in July, which introduces severe fines for journalists who report different figures on terror attacks to those issued by the government.

Also speaking at the conference was lawyer Fatima Siraj from the Association for Freedom of Thought and Expression (AFTE), who spoke of the difficulties in securing justice for political defendants through the judicial system. Siraj highlighted the case of activist Ahmed Douma and the 229 others who are defendants in the 2011 ‘cabinet clashes’ case, and who received life sentences and a collective fine of EGP 17m in February. The defendants are accused of illegal assembly, possession of arms, assaulting police and military forces, and damaging government facilities, among other charges.

The case is being judged by the controversial Nagy Shehata who is known to hand out severe sentences in trials relating to the revolution. Siraj said that having the case overseen by Shehata makes it ‘satirical’, with him adding on charges, including ‘insulting the judiciary’, to people’s cases. “Absurdities happen every day in the courtroom against lawyers and defendants,” she said.

Siraj also highlighted how 86 of those detained in the cabinet clashes case are being held in the “inhumane”, notorious Al-Aqrab wing of the high-security Tora Prison, which has a reputation for political prisoners and abusing prisoner’s rights.

In August, a delegation of the semi-official National Council for Human Rights (NCHR) visited the Tora Prison and claimed they witnessed no major violations of prisoners’ rights. The delegation made only minor recommendations, including changing old beds and creating a shaded area for families queuing to visit.

The NCHR delegation had visited the complex following numerous reports of violations and deaths. In August, Essam Derbala, a former Al-Jamaa Al-Islamiya leader, died due to what the group called intentional neglect of medical care. The authorities, however, argued that his death was caused by a sudden drop in blood pressure. Muslim Brotherhood member Farid Ismail also died amid similar accusations of intentional neglect.

Various NCHR members, however, criticised the visit and the way it was organised. Mohamed Abdel Qodous, an NCHR member who was part of the delegation, added that the prison administration knew of the visit beforehand and prepared for it appropriately.  He wrote in a public statement: “For example, the prisoner’s family would obtain a visit permit and the administration registers it in the logs, then prevents the family from entering the prison.”

“Down with your state if our freedom is absent”