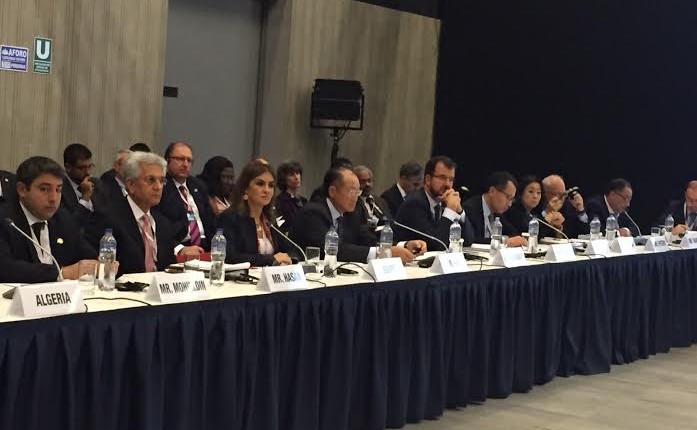 The Egyptian Minister of International Cooperation, Sahar Nasr, headed a meeting on Sunday with the governors of Arab central banks and World Bank President Jim Yong Kim, according to a Monday statement.

The meeting comes as part of the annual meetings held by the International Monetary Fund and the World Bank, currently taking place in Lima, Peru.

Nasr began her speech by praising the World Bank for providing an opportunity for all partners and stakeholders to discuss and exchange views on the bank’s new strategy in the region to serve the interests of all.

The World Bank deploys significant efforts in order to help the region’s countries, particularly those facing political, economic and security crises, Nasr said. These crises also affected a number of countries, Nasr added, highlighting the need for different financial alternatives to counter the negative effects of these crises.

The minister also thanked the World Bank’s president for delivering an innovative strategy and financing methods, which contribute to financing reconstruction efforts in countries facing crises in the region. She also hoped for the strategy to be translated into projects on the ground.

Further, Nasr noted that the World Bank’s strategy must contribute to achieving cooperation between Middle Eastern countries and the world. She added that in order to achieve this cooperation, the World Bank should create regional initiatives to implement economic development projects.

In conclusion, the minister said this strategic meeting contributes to the creation of a general vision to meet the development needs of the region’s countries, such as eliminating unemployment and poverty, and raising living standards.

Nasr also praised on the effective efforts undertaken by the World Bank’s Vice-President for the Middle East and North Africa (MENA), Hafez Ghanem, noting  that he always seeks to explore all the financing opportunities available in the region in which the bank can contribute.

Egyptian Minister of Finance Hany Kadry Dimian also participated in the annual IMF and the World Bank meetings in Peru. Dimian attended a number of prominent meetings, among which was a meeting with the officials from the state participants in the Deauville partnership initiative.