Even with a revolution and multiple massacres the reported Egyptian death toll is, approximately, 5,000 dead. However, a far bigger killer, Hepatitis, aka Virus C, and related liver diseases decimate nearly 45,000 annually. But without creative solutions, prevention, and organisation the Egyptian government is falling behind in the one of its biggest battles: not the one against terrorism but the other involving an organised killer: Virus C. Painfully, a regime that saw it fit to spend, well over, $8bn on the opening of a ‘new Suez canal‘, does not realise that Virus C is a far more pressing Egyptian national security issue.

A regime that has fallen into the pit of haphazard policy making is facing an organised virus with its viral machine guns focused on an, economically destabilising, 9 million Egyptians. How Egypt arrived at this crossroads is a tale of incorrect action, inaction and misguided egos.

One of the chief reasons Virus C continues to float, sub political surface, is the medical nature of the debate. Put simply, the medical discourse intimidates politicians and laymen alike. But a recent study unveils the statistical dynamics of this disease’s attack and screams “pay attention or else”. At the core of the study are numbers that speak loudly to how inaccurate and misguided government efforts are in tackling the insidious disease. A source close to the study, whose name requires anonymity due to the politically sensitive nature of the research, coauthored by Dr. Ahmed Shelbaya, A. Kuznik, M. Salem and K Sadik, which examines the Epidemiological & Economic Burden on Egypt as a result of Hepatitis infection, explained it is meant to guide policy- not criticise it.

An important conclusion is reached by the study: whereas the government believes that treating approximately 165,000 Egyptian patients a year will effectively control disease spread, by the year 2030, the number of patients to be treated needs to be significantly higher: nearly 450,000. This large variance reflects a scientific approach, on the one hand, by the researchers and one that is lacking in long term vision and accuracy, on the other, by the Egyptian body politic and the Egyptian scientific community.

Egypt is at this existential crossroads because of mammoth past mistakes. Long ago, a killer disease, associated with larva in the dirty fresh waters of the canals of the Egyptian countryside, known as Bilharziasis , roamed Egypt and became famous for killing, via its numerous consequences, one of Egypt’s most beloved singers: Abdel Halim Hafez. But Egypt, worked to combat the disease, in a prototypical manner, by offering treatment, via injection, in its many clinics dotting the country side. Tiny problem: in treating one huge issue, the medical theories go, they created a monumental disaster: the needles were infected and so began Egypt’s plight with Virus C. Infected needles facilitated the disease’s explosion.

In the cynical world of managing national health care, at a policy level, deaths, while sad, and in this case they are estimated to be 40-45,000, are not the biggest issue. With death comes zero cost to the government. Sick patients are the issue for a government ill-equipped to handle the disease and its attendant social, economic and political effects. According to the study, while the approximately 9 million struck by Virus C will not all be hit with the active strain of the virus (Viremic), the number is still monumental and the highest in the world: approximately 6.5 million. But that’s only the beginning of the problem, explains the source: for every 150,000 you treat you are adding, at a minimum, an equal number who are being infected by the original 6.5 million viremic patients. Dizzyingly, the majority of patients don’t even know they are ill. 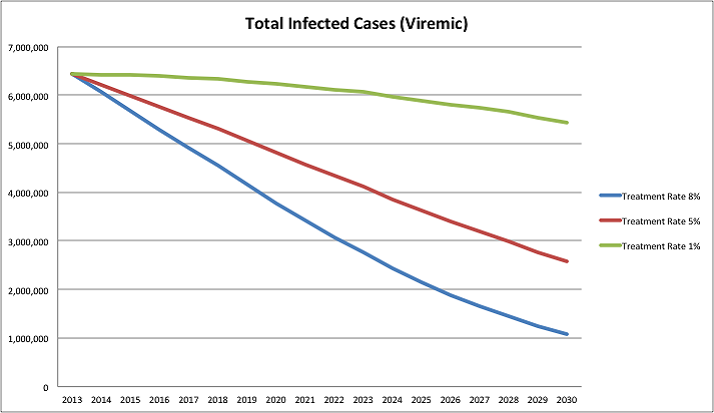 There should be hope with the discovery of the new Hepatitis anti-viral medication and Egypt took some great steps forward by negotiating the cost of medication down to manageable levels. In fact, hope exploded early last year, in March, when headlines blared “Gilead offers new Hepatitis C Drug at 99% discount’’. The drug’s commercial name Sovaldi has become synonymous with hope for millions and it offers, at a cost of $900 for 12 week course, a success rate of slightly above 92% confirms the study. Important, however, to understand that Virus C and its resultant liver disease have different stages and do not kill with immediacy. Those stages begin at F0 and ascend to F3, beyond that the more advanced stage of cirrhosis sets in and probabilities of successful treatment, even with Sovaldi, drop to 80%.

Those numbers are, nonetheless, considered an amazing advancement. So where is the problem? For one, there is a large difference in perspective between the scientists and the official Egyptian channels. The study makes it clear that to eradicate Virus C the government will have to more than double its projected numbers for patients to be treated annually. The government’s projected magic number is 165,000 but, as the graph above shows, that number needs to be closer to 450,000. Numerically, the current Egyptian governmental treatment plan, currently, is feeble, by all accounts, at a mere 65,000 or 1% of these viremic patients. What needs to happen, says the crucial study, is an upping of that number from 1 to 8% or from 65,000 to 450,000.

Naturally, in a bottom line world, the question is: at what cost? Put in perspective, that will be familiar to many, the cost annually will be $1.3 billion or 1/7 of the cost of the very ‘new Suez Canal’ who Sisi said is worth it “if only to make people happy”. But making people happy isn’t primary goal of a state. Keeping citizens alive, functional and productive should upper most in the minds of leadership.

Once that initial investment of $1.3bn is made, the brilliance of the plan laid out by the study, cost will decrease as the cases of Viremic Virus C drop as well. Liver related deaths would decrease from “41,000 to 24,000’” and ultimately to ‘’14,000’’. Accordingly the cost would be denuded from $1.3bn to less than half by 2030: $580m. To be clear, this will come down to the political will of those in charge of the Virus C portfolio. Arguably, the study’s assertion that ‘’with 450k/year, Egypt could bring the Hep C prevalence down to 1%’’ would ostensibly, in the long term, pay for itself by activating sectors of the labour force currently dormant because of the disease.

Prominent among the demands of a failed revolution was social equality, a paradigm best aided by employment and a more proficient, non-classist, healthcare system. Both are interrelated but to understand so one requires a focus and an ability to prioritise. Instead of going to ‘’war against terror’’ the government needs to go to war versus Virus C. And to do that it must leave behind overly simplistic policy processes that think in limited ways. You do not obliterate a disease as complex, as long term or as silent by applying a course of treatment then walking out of the room and turning the lights off. You, says the source, must find tangible ways to be able to reduce the viremic population in a way that is able to successfully identify undiagnosed patients. Without this crucial step you will continue to manufacture this medical disaster by in the box thinking.

Fail to be creative, continue to be reactive rather than proactive and the government will be saddled with this medical scarlet letter for years to come, for Hepatitis is not a short term disease. In fact, the disease’s chief killer, liver disease, works in a cycle of decades, rather years, with average life cycle, from infection to death, being in the 20-25 year range. So it behooves Egyptian politicians to recognise that an assets/liabilities analysis requires defeating the disease as the fiscally optimum solution. With the lion’s share of deaths worldwide 45,000 out of an international total of 500,000 annually, per the World Health Organization, Egypt is losing a battle it can ill afford to lose. Effective treatment, no matter the initial expense, is far more cost effective than allowing the disease to continue to mushroom and dealing with the economic double whammy: long term health costs and a reduced work force in its economic prime.

But the Egyptian health care field is no different than other sectors of the Egyptian society: wracked by corruption and big egos looking to score points with the ruling hierarchy. If the leader in control is consistently displaying a penchant for mega projects, whether it be a ‘new Suez Canal’ or a new ‘new Cairo’, and the attendant attention they garner in a highly pliant domestic press then why should health officials behave any differently? Talking about Virus C is not sexy. In Egypt, innovation can be the quickest way to lose a job as an official. Unless that changes, taking chances on listening to outside well-reasoned scientific voices may not be a feasible option in the current political climate. To effectuate change there must be courage and intelligence. Let us not forget it was the army who stamped with approval the great ‘Kofta’ fiasco and entire sectors of society believed this laughable tangent.

Egypt watchers with a keen eye for such nuances will tell you that courage, in governing circles, has rarely existed.

For the sake of 6.5 million Egyptians let us hope these watchers are wrong and there are reasonable politicians who will recognise this organised virus for what it is: a national security threat.

A visit to Egypt before Tahrir