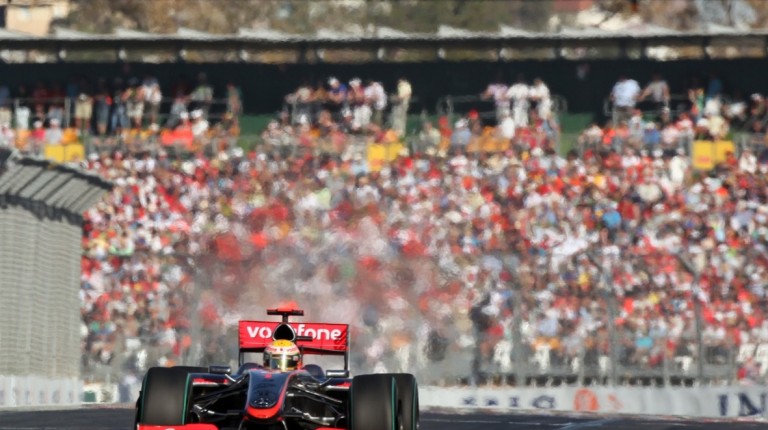 Formula 1 world number one, the British Mercedes driver Lewis Hamilton, got close to acquiring the world championship title for the third time in his career, and the second time in a row, by acquiring his ninth title this year on the calendar of Formula 1 competitions.

He managed to obtain the title at the Russian Grand Prix in the Sochi circuit, recording a time of 1:37:11.0, after the driver of the German team, Nico Rosberg, withdrew from the race.

The nine races Hamilton won were out of 15 races that took place this year. There are only four competitions left on the calendar for this year, which will be held in the US, Mexico, Brazil, and the UAE, respectively.

Rosberg had the shortest time in qualifying, which pushed him forward from the first place. On the other hand, Hamilton found himself in second place behind Rosberg in the first round. He failed to exceed him; however, the world championship was lucky: Rosberg faced a problem with thethrottle, which forced him to withdraw from the race, leaving the track open for his team-fellow to reach first place.

Rosberg is in dire need of a miracle to be able to get back on track for the championship, especially after he retreated to third place in the drivers’ ranking, recording 229 points, following Ferrari’s Sebastian Vettel, who was able to record 236 points.

Vettel took second place with a difference of only six seconds from the race champion. He was able to get back into the competition although he had a slow start in the first round behind his fellow Ferrari driver Kimi Räikkönen, and behind Williams driver Valtteri Bottas.

Mexican Sergio Pérez, driver of Force India, took advantage of the accident between Valtteri Bottas and Kimi Räikkönen, taking third place in the race with a difference of 29 seconds from the first place. This is the first time for Sergio Pérez and his team to reach first place in 2015.

The following are the ranks of the drivers who took the first ten places in the race: