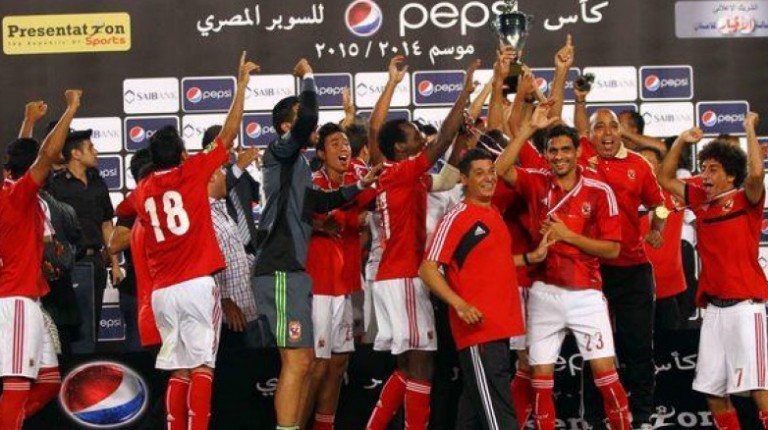 The game is expected to have a large audience in attendance for the first time in years, since fans were prevented from attending most league and cup games in Egypt.

Al-Ahly is a leader in the tournament, in which it played nine times. The football club won eight times and only lost once. Al-Ahly did not participate in the cup when it was launched in 2001, as it was also participating in several African games at the time.

Al-Zamalek FC won the first super cup title. It was also the first team to win the Egyptian Cup in the 1921/1922 season. In 2001, Al-Zamalek played against Ghazl El-Mahalla instead of Al-Ahly and won 2-1 after extra time.

Al-Zamalek also won its second super cup title in 2002, the last cup it won. The game was against the Arab Contractors team, which held the fifth-position in the Egyptian league standings for that season, after Al-Ismaily, which was the champion of the league, decided not to play the game. Al-Ismaily withdrew from the game as it was opposed to holding the game in Cairo instead of Ismailia City. Al-Ahly and Ghazl El-Mahalla also decided not to play. Al-Zamalek won 1-0, also after extra time.

Al-Zamalek’s third super cup game was in 2003. It played against its rival, Al-Ahly. Although Al-Zamalek won the first two titles, Al-Ahly beat it and got its first title after playing penalties (3-1) for the first time since the start of the tournament.

In 2005, Al-Ahly began to take full control over this local tournament, and it also dominated most domestic and continental championships. The team was nicknamed the “club of the century” in Africa. During this season, Al-Ahly beat ENPPI 1-0 after playing for extra time. Al-Ahly harvested every title since then, and won four consecutive super cups (2005, 2006, 2007, 2008), including twice at the expense of ENPPI and once playing against Al-Ismaily and once against Al-Zamalek.

Al-Ahly lost a Super Cup match only once, so far, in 2009, when playing against Haras El-Hodood. One year later, Al-Ahly took its revenge and beat Haras El-Hodood in 2010. The next season, in 2012, Al-Ahly won again, this time against ENPPI. The most recent title won by Al-Ahly was in 2014, when it beat Al-Zamalek for the third time after playing penalties.

As mentioned earlier, Al-Ahly has the largest participation record in the Super Cup, with eight wins and a single loss, a success rate of approximately 89%. It is followed by Al-Zamalek, which participated six times, of which it won twice. This time, Al-Zamalek seeks to achieve its third win, after an absence of 13 years, while having also won titles of the league and Egypt Cup.

ENPPI is the third biggest participant in the Egyptian Super Cup. ENPPI participated three times, and lost all matches. Ironically, they were all against Al-Ahly (2005, 2006, 2012). Al-Ahly Ultras fans tried to prevent the 2012 game from taking place after the famous incident of Port Said. Al-Ahly at the time withdrew from the game, while the famous Egyptian player and the newly retired, Mohammed Abu Trika, apologised for not participating in solidarity with the Ultras.

Arab Contractors and Haras El-Hodood both participated twice in the Super Cup. Each won one game. Arab contractors won against Al-Zamalek, and lost the other game against the same team. Haras El-Hodood won once against Al-Ahly and lost to the same team the second time. Ghazl El-Mahalla and Al-Ismaily both played once, the first lost to Al-Zamalek and the latter lost to Al-Ahly.

Only seven teams participated in the 12 rounds of the Egyptian Super Cup. Al-Ahly dominated most tournaments during the period, between 2001 and 2015. Al-Zamalek was, as usual, the runner up. This comes in addition to other participations by teams that only got to play when the main players withdrew for various reasons.

Penalties were held in three games. Al-Ahly won all of them, twice against Al-Zamalek and once against Al-Ismaily.

Nine confrontations ended with the victory of one of the teams, including three times in extra time, where Al-Zamalek won its two titles through them, and once Al-Ahly won.

During the 12 Super Cup games, 22 goals were scored, an average of at least two goals in each match. Al-Ahly, of course, is the highest scoring team, as it scored eight times and received four goals. Al-Zamalek, on the other hand, scored five goals, totalling seven goals over six games. It is the team that scored most goals in the history of the tournament.

The biggest win was in favour of the Arab Contractors (4-2) at the expense of Al-Zamalek. The Arab Contractors has the best average scoring rate in the Super Cup, where it scored four goals in only two games. The only game that ended in a positive draw (1-1) before resorting to penalties was in 2007 between Al-Ahly and Al-Ismaily.

8 arrested in aftermath of Al-Ahly vs Al-Zamalek match