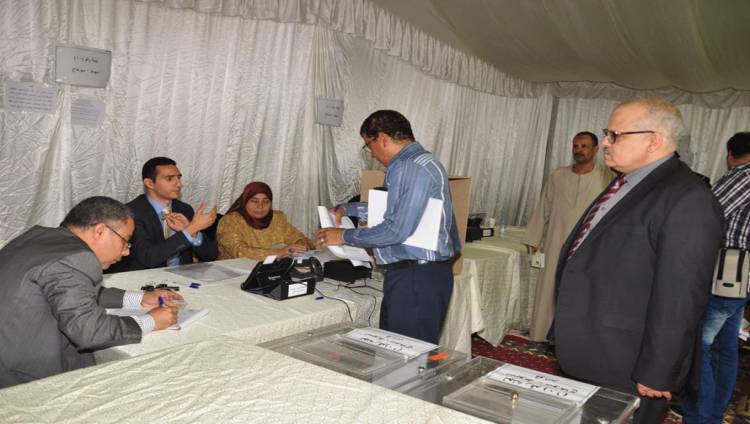 The Supreme Electoral Commission will announce parliamentary elections results for Egyptians living abroad in a press conference on Monday evening, counting votes of 139 Egyptian embassies and consulates, according to the Ministry of Foreign Affairs.

Egyptian embassies abroad revealed initial results for Egypt’s parliamentary elections, after Egyptians abroad voted on Saturday and Sunday. They suggest that the “For the Love of Egypt” (Fi Hob Misr) electoral list obtained the majority of the votes, according to several reports by state-run news agency MENA.

The Egyptian Embassy in the United Kingdom said Sunday night that the total number of votes was 280, 276 of which were valid for individual seats. In the lists, 143 correct votes were counted and 4 were voided, MENA reported.

“For the Love of Egypt” obtained 126 votes, followed by the Nedaa Misr electoral list  with eight votes, then The Egyptian Front Coalition and Tayyar Al-Istiqlal list with six votes, and finally three votes for Al-Shawa Al-Wataneya Al-Mostaqila list for the Upper Egypt constituencies, covering 11 governorates, excluding Alexandria, Beheira, and Matruh.

All of them are part of the West Delta constituency, where the total number of votes reached 133, 122 of which went to “For the Love of Egypt”, seven for The Egyptian front Coalition and Tayyar Al-Istiqlal, two for Forsan Misr and Al-Nour Party’s list each.

In Washington, Ambassador Yasser Reda told MENA that “For the Love of Egypt” obtained 71 out of 74 valid votes for the Upper Egypt constituency, followed by three votes for Nedaa Misr and only one vote for The Egyptian Front Coalition and Tayyar Al-Istiqlal.

He said in the West Delta constituency, “For the Love of Egypt” won 56 out of 63 valid votes, four votes for Forsan Misr and two votes for The Egyptian front Coalition and Tayyar Al-Istiqlal.

In Jordan, Ambassador Khaled Tharwat announced the total number of voters was 1,067, 74 of which were voided, divided between Amman and Al-Aqaba. A total of 992 votes in Jordan were counted for the Upper Egypt constituency.

Moreover, there were 85 votes for the West Delta constituency. According to MENA, Egyptians in Jordan faced issues in transportation costs due to living far from polling stations. An estimated official number of 300,000 Egyptians live in Jordan.

In Algeria, Ambassador Omar Abou Eish said only 30 voters in total participated in the elections, including one voided vote. Voters also faced the issue of polling stations being far, with distances from 400 km to 800 km away.

Thousands of Egyptians in Kuwait went to cast their votes on Sunday, according to Ambassador Yasser Atef, who told MENA that voters were confused on whom to vote for, as they lacked knowledge about candidates, especially those running for individual seats.

He said the voting process per person did not exceed two to three minutes. However, a citizen spoke Sunday evening on TV saying he waited for over four hours in line and left due to technical issues with the server in the embassy.