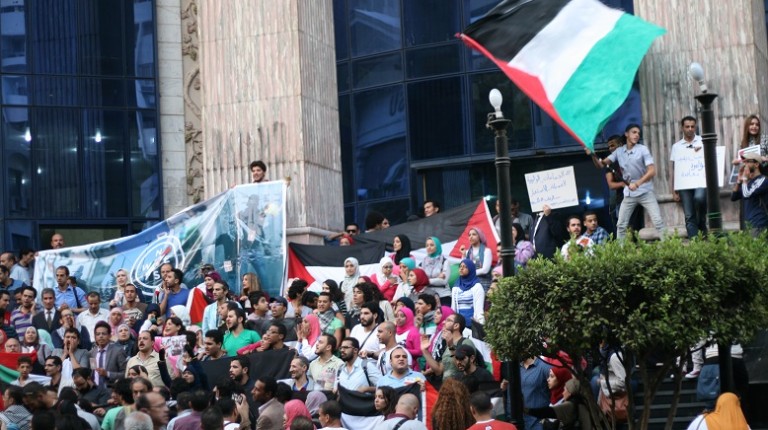 Protesters gathered in front of the Press Syndicate Sunday in solidarity with Palestinian resistance as part of an event jointly organised by the Egyptian branch of the Boycott, Divestment, and Sanctions (BDS) movement, the Press Syndicate and the Popular Movement to Support the Intifada.

Prominent figures including writer Ahdaf Soueif, Khaled Ali, and Abdel Moneim Aboul Fottouh, gave speeches during the conference which was held at the syndicate following the stand.

A joint statement will be released in the coming period as more parties, syndicates and groups join in to express a unified stance regarding the situation, said BDS spokesperson Ramy Shaath.

The press conference mainly delivered three messages, Shaath told Daily News Egypt. The first was directed to the Palestinian people, saying that Egyptians still “strongly support” the Palestinian cause, despite the negative image some media outlets try to present. Palestinian activists took note of Sunday’s stand and expressed their appreciation.

Shaaht said: “The second message is directed to the Egyptian people, who have started to show confusion recently as they are bombarded with a lot of side talk from the media, which diverts their attention from the cause.”

“Unfortunately there was no coverage by state media for our event, which means our message was not delivered to enough people,” Shaath added.

The third and final message was directed to the Egyptian state, demanding an end to what Shaath referred to as “an inconsistent national security strategy”. The event organisers hold the belief that Egyptian policies have been shifting to attend to the immediate needs arising as a result of recent internal developments, without taking into consideration Palestinian concerns.

“We will continue organising events of this kind,” Shaath said. “Their main objective is to reveal the true events to the Egyptian public, so they can better understand the situation and thus be able to exert political influence.”

Also, on Sunday, a stand was organised in Cairo University, including a photo gallery of Israeli violations against Palestinians. However, it failed to continue as university security personnel dispersed the stand and arrested some of its organisers. The arrested included members of the Revolutionary Socialists group, and were released later that night, according to Shaath.

Another stand was organised by the group in Alexandria University on the same day, according to the group’s official Facebook page.

The conference entitled “Palestine is our compass”, discussed the most recent Israeli violations and showcased photographs of violations and a documentary on recent events. Footage viewed during the conference is mostly not shown to the Egyptian public via state media, according to Shaath.