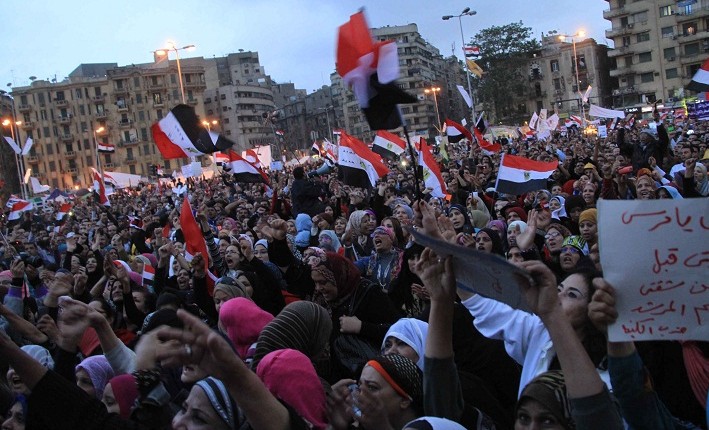 The Cairo Institute for Human Rights Studies (CIHRS) published its sixth annual report on the human rights situation in the Arab world in 2014 Monday, identifying the most widespread human rights violations.

Increased extrajudicial killing combined with systematic impunity, the systematic curtailment of human rights activities and civil society, and the disregard of human rights based on ostensible security and counterterrorism grounds were among the most widespread types of violations.

The report titled “The Arab Spring on Trial” describes the deteriorating human rights situation as a natural outcome of the failure of the political transitions that followed the ‘Arab Spring’ uprisings. It attributed the worsening situation to the “wide-scale, systematic perpetration of the most serious violations in many countries of the region”.

CIHRS director Bahey El-Din Hassan wrote in the report that the most significant event of 2014 was the “qualitative development in the forces of terrorism, most prominently illustrated in the rise of the Islamic State (IS)”.

On Egypt, the report states that since the ouster of former president Mohamed Morsi in July 2013, the security forces and the army have been implicated in “extensive assaults” on Muslim Brotherhood members and supporters.

On 25 September, nine individuals identified by the Ministry of Interior as armed Brotherhood members were killed by Egyptian security forces during a raid on a Giza home. Media reports gave conflicting accounts of the incident.

In similar circumstances, nine members of the banned Muslim Brotherhood group were killed in July in a police raid on a 6th of October City apartment.

The report also accused most governments, including Egypt, Sudan, Bahrain and Algeria of using lethal force to curtail popular protests or peaceful sit-ins.

Human rights defenders in Egypt have been subjected to “systematic persecution and arbitrary restrictions on their right of expression, association and peaceful assembly in 2014”.

Activist Yara Sallam from the Egyptian Initiative for Personal Rights (EIPR), Sanaa Seif and 22 others were given a two-year prison sentence for breaking the protest law in the Itihadiya protest case . Activist Alaa Abdel Fattah was also sentenced to five years in prison in the Shura Council trial.

Sallam, Seif and other young political detainees were released from prison as a result of a presidential pardon granted for 100 prisoners on the occasion of Eid Al-Adha late September.

The report outlined other types of widespread violations including; the curtailment of media and freedom of expression and opinion, the use of the judiciary as tool to eliminate political opponents, and hardships faced by religious and ethnic minorities.

The judiciary in Egypt has been scrutinised by many observers and human rights groups for being politicized and for holding mostly unfair trials. The report sees the trials as “retaliatory in nature and lacking all due process guarantees”, especially with many verdicts involving mass death sentences or life imprisonment.

CIHRS affirms that the ‘Arab Spring’ is not the cause of the deteriorating human rights situation, but a final attempt by Arab peoples to instigate change in the “authoritarian and autocratic” governments that are unwilling to reform.

The organisation opted for a brief report this year as it was unable to publish its detailed annual human rights report due to “the unprecedented security pressures and threats facing its staff and administration in Egypt”.

CIHRS moved its main headquarters to Tunisia in December 2014, citing threats to its operations due to repressive laws and practices in Egypt.