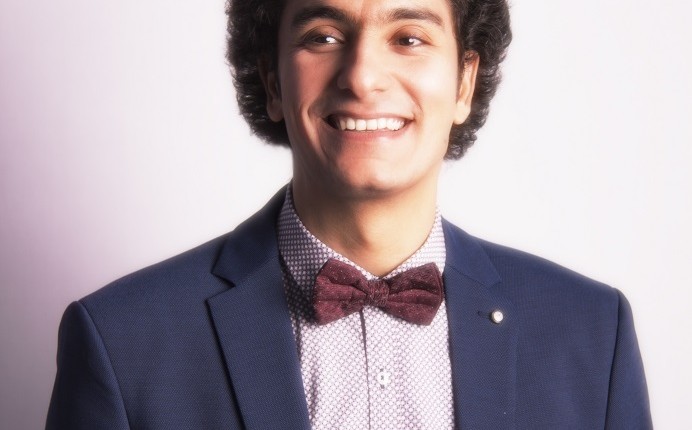 Over centuries, music has been playing a crucial role in documenting the world’s revolutions and countries’ histories. Believing in the power of the word and how it can influence the present and future of a whole nation, musicians used their instruments as weapons to express the sufferings of the masses, their calls for justice and freedom and their hopes for change and political reformation. Therefore, music was always considered as a mirror that honestly reflects the society with its heterogeneous segments and sheds lights on the crises and problems people from different social classes suffer from in their daily lives.

However, the last decades witnessed a total neglect for our Arabic music heritage as most of young Egyptians turned to listen to western genres of music believing it’s more prestigious and up to date.

With his spectacular voice, remarkable musical knowledge and endless love of adventure, Mohammed Mohsen managed to revive the classical Egyptian folklore and attract the young generations to it in a more appealing way. Among our iconic singers and composers, Mohsen chose to reproduce the songs of “Mohammed Abdel Wahab” and “Sayed Darwish”, blending originality and modernity in a special recipe that created a unique musical phenomenon challenging all the hardships and difficulties. Although he has studied chemical engineering in Cairo University, his passion for art was always his biggest momentum and motivation in life.

Mohsen isn’t just a charismatic singer whose voice can take you into a journey outside all the boundaries, he’s a pure story of persistence, challenge and success that must be told over and over and a unique idea that must be supported and promoted. In an exclusive interview with Daily News Egypt, Mohsen talked to us about his beginnings and how he was selected to participate in Leila min Alf Leila (A Night of the Thousand Nights) play that could collect the highest revenues in the State Theatre. He also revealed some secrets about his new album and upcoming artistic projects.

I always put “challenge” and “adventure” in front of my eyes when I start a new project. The whole thing started when I was a little child as my parents used to listen to the iconic Quran reciters such as Mohammed Reefat and Mostafa Ismail who used to recite Quran in a way that convey the meanings and feelings of each verse to the listeners in an expressive way. I knew that I had a remarkable voice but I used this only for reading Quran and memorizing it in “Al-Kottab” during summer vacations in the small village I was born at in Giza. Reciting Quran taught me how to pronounce letters in a proper way and how to sing Fusha songs without mistakes. However, I was more interested in studying and pursuing my academic years and I’ve never thought of being a professional singer at that time, especially, that our secondary school had an old theatre that was always closed and all the musical instruments were destroyed so we couldn’t make any use of the music classes.

When I went to university, I started paying more attention to the student activities and I decided to join the theatre troop where I used to sing the songs displayed in their different plays or compose the music. I started to be more attached to Sayed Darwish and Sayed Mikkawy’s songs as they were strongly related to the reality we were living at. The real turning point for me was when I joined the singing and composing competition in the university as I won the first place. Then, I joined the university’s chorale and left it after one year.

In 2007, I joined the Opera House’s Cairo Heritage troop with the conductor Osman Abbas who allowed me to sing for the first time on the Opera stage which made my biggest dreams come true. In 2009, I met a group of volunteers who wanted to establish “Sayed Darwish’s Festival” to revive his memory in the area he was born at in Alexandria. I sang three songs there and I met a group of musicians who were playing Sayed Darwish’s music. They were students from Syria, Lebanon and Palestine and they came to study music here. I invited them to my house and we launched our first band “Mohsen Wel Ferqa” where we started to perform in many different places that are interested in presenting classical music heritage to the audience. At that time, I decided to challenge everyone, including my family, and consider singing as a career and engineering as a hobby.

I’m proud to admit that the revolution gave me the real artistic birth certificate. When I participated in the protests in Al-Tahrir Square, just like millions of the Egyptian youth who dreamed of change and political reformation, people started asking me to sing. I sang “Bilady Bilady”, the national rhyme, in front of three million persons which made me feel satisfied. From the square, I met a lot of singers, composers, and poets and made a lot of connections and relations with many artists including Mustafa Ibrahim and Michael Adel who wrote my first personal songs in the first Album “El Laf fe Shawar’ek” or “Touring your streets” that I released in the first memory of the revolution. For this Album, I received the best Arabic singer’s prize in Jordan Award’s festival. In brief, I wanted to choose a unique route that’s completely different from the other tracks other artists usually choose for themselves.

We performed this play on Miami theatre in Talat Harb Street for about two months and I presented a collection of new songs that I composed. After this play, I was nominated for my role in “Zai El Ward” TV series in December 2012 where I presented a number of romantic songs for the first time. I was satisfied by the success of my role in the series and I started to make some concerts. Although I have my own songs now, I would never stop singing classic songs as it’s my responsibility to introduce our heritage to the young generations and help them know more about Mohammed Abdel Wahab and Sayed Darwish and other artists who helped construct our Egyptian identity with its unique customs, traditions and culture.

When I was in the secondary school, I used to save money to go and see the great actor Yehia Al Fakharany in “King Lear” play on the State Theatre. Today, I stand with Al Fakharany on the same stage. For me, this is a big dream that I’ve never imagined before.  For me, theatre is a blessing from god as it allowed me to learn what I didn’t learn in music or acting schools. We’ve been making daily rehearsals since March and we’ve been performing it for two months now. Everyday, I lean something new concerning how to move on the stage, the ballet steps and how to act in front of an audience. I feel more attached to the role of the caliph I’m playing.

For me, the luck means to be ready for every coincidence that may happen in your life. Coincidences don’t take place every day and you have to be ready for the all the time as they happen without waiting for them. I believe that I scarified many things including my engineering career and defying my parents for about two years. I try all the time to be in my best shape and to be ready for any of the chances that god sends to me. In my opinion, the talented person must create his own chances. I depended on myself, created my band and challenged all the hardships.

Many production companies offered me joining them but I think that being in a certain company may somehow restrict the space of freedom you need to produce your artistic works in the way you love. I know how to choose the lyrics I sing and how to select the music that will be suitable for them and I would never accept being obliged to sing any songs that I don’t like.  If I guarantee that this wouldn’t happen when I join a production company, I’ll definitely go for it. As for the marketing, selecting the releasing time of the album and designing the cover, etc, I leave such tasks for the specialists. I care about the quality of my work a lot and I always save money to produce every song separately. When I find that I have sufficient number of songs, I think about the second step of releasing an album and finding a sponsor to start copying the album. I think this trend will be popular during the upcoming years.

In my opinion, art is a message and a pleasure at the same time. As long as people find these factors in any artistic work, they feel satisfied. The genre of music and songs provided by Sayed Darwish were considered as Folklore popular music as they reached all the social classes of the Egyptian society that was completely different from the reality of the society we live in nowadays. In the 1920s, they used to learn poetry of Al Motanaby and Antara Ebn Shadad and others, however, the three past decades witnessed a deliberate destruction for the Egyptian identity.

Therefore, we have a genre of music that suits the people who live without water, sewage, schools or hospitals in many poor villages. Such people would never create a symphony under such circumstances. However, it’s a kind of art and it must be respected because large proportion of population lives the reality that such songs present.  People who can’t read or write would never understand a classical song in Fusha as we have to talk to them in their own language. I respect them but I would never sing such songs in my whole life.

I composed about 90% of the songs I released till now but I’m convinced that you can’t depend on yourself in everything so I decided to give a chance for other composers to introduce their own styles and points of views in the new album songs as they have a higher experience in the composing field.  In my new album, I cooperate with many poets including Mostafa Ibrahim and Nasr El Din Nagy and many composers like Ahmed Farahat Ahmed Genedy and Osama el Hendy. It would take the social romantic theme and it would be away from politics. The album would also present some new topics that I’ve never sung before and it will mix modern music with the original classical identity. I plan to issue it by the end of the next winter, God Willing.

'Complexions' rise to color and love