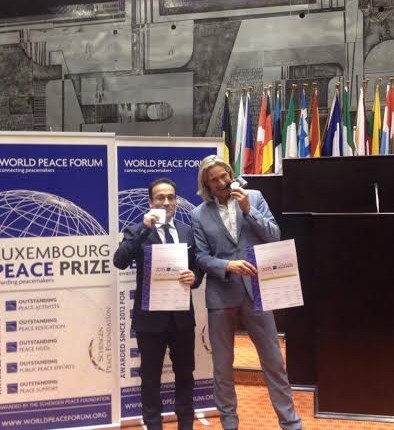 In the past few years the name ‘MasterPeace’ has became a name for several masterpieces in the entertainment world. The local movement has been changing realities through the use of music and art. Therefore, it was only natural that the highly successful series of events gets crowned with the prestigious Luxembourg Peace Prize for ‘Outstanding Peace Organization’ in Luxembourg City.

The award was presented to the movement founders Mohamed Helmy, from Egypt, and Ilco Van Der Linde, from Netherlands, at the historic European Parliament building.

“The award comes as a sign of recognition of MasterPeace’s unique and positive bottom-up approach in peace building. In less than five years we managed to spread out to 46 countries and organise hundreds of initiatives with creative resource utilisation, minimum budgets and full dependence on local talents. We proved that the positive approach in conflict prevention and peace building is much more engaging and appealing for the masses all around the world than waiting for governments’ actions alone,” said Helmy.

More than 200 influential figures attended the ceremony; the attendees represented a mix of political leaders, artists, educators, and activists from Egypt, the Netherlands, Argentina, Italy and Romania. This year marks the 9th awarding gala organised by the Schengen Peace Foundation and the World Peace Forum.

“We are honoured to recognise this year seven innovative peacemakers from five different countries and three different continents. Their works are more relevant than ever, since worldwide displacement hits all-time high with 59.5 million people, according to UNHCR, as war and persecution increase in many parts of our world,” said Dominicus Rohde, President of the World Peace Forum.

Since its inception back in 2011, MasterPeace managed to gather extended crowds around the love of art and music. The events organised by the peace-building movement have toured several countries, even the ones that suffer from dreadful conflicts. However, their true strength point is their innovative implementation of the events.

Their most notable activation, Playlist, was based on the idea of organising two parallel music concerts in countries that are either in a state of conflict or suffer from a cultural gap. The two concerts featured the other country’s music in order to highlight their cultural meeting points and introduce their differences.

This award is the fourth on MasterPeace’s list of international prizes. However, their most prominent recognition was given to them by UN Secretary General Ban Ki-Moon, who presented the United Nations Correspondence Association ‘UNCA’ for Innovation in Peace-building award back in 2013.

Meanwhile, the ‘Luxembourg Peace Prize’ was first awarded in 2011 as an international recognition to influential peace-makers. The bronze medal is designed by Luxembourg artist Sophia Rein, depicting on one side the face of Nelson Mandela and the view from Mandela’s prison cell window on the other.