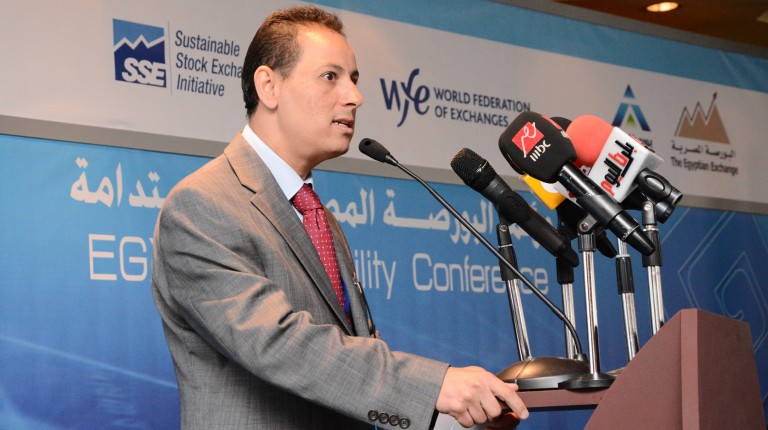 Chairman of the Egyptian Stock Exchange (EGX) Mohamed Omran said EGX’s attention to sustainability is not a luxury amid the challenges taking place in the stock market from a lack of liquidity and other issues.

He said EGX is now thinking outside the box since waiting for market challenges to end is not an option. The business community does not have enough awareness of the importance of sustainability and the size of the opportunities it produces, as was the case with governance, which showed the reluctance of investors’ interest in them.

He said that at the time, governance was seen as a luxury and its application led to develop financial and organisational systems of companies or attract new investments, as well as protecting companies from many of the financial crises that hit many markets in the recent period.

Omran knows the importance of imposing sustainability in the current period, noting that there are investments worth $20tr awaiting its application.

He ruled out the possibility of ignoring those investments, as simple math could show that if the Egyptian economy acquired one thousandth of those investments it could still attract $20bn.

Sustainability does not mean maintaining the environment only since it is also concerned with the preservation of society’s resources and the fight against corruption. It will also improve the conditions of labour, transparency, and gender equality, which are not a luxury, according to Omran.

He said the first conference on sustainable development will serve as the beginning of a series of workshops and seminars aiming to instil awareness within companies of the importance of sustainability and the benefits they will receive.

The conference aims to launch a common initiative to spread sustainability within the Egyptian business community with a primary goal to put the Egyptian Stock Exchange and the Egyptian economy on the global economic map.