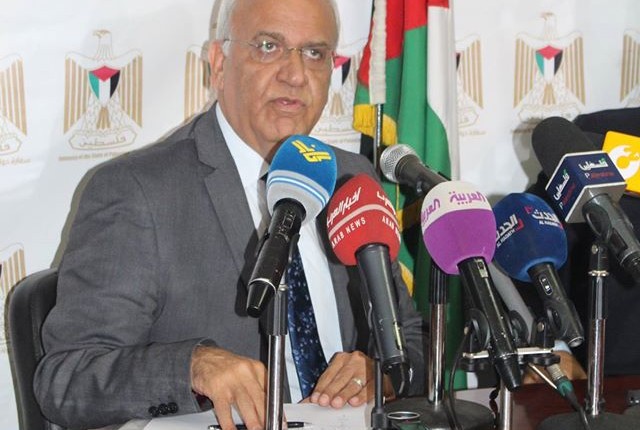 He said every military move has its own political aim and the aim of Israel’s latest action is “to obliterate the two-state solution”. No stability can be achieved in the region without confronting Israel, according to Erekat.

Palestine appreciated both Jordanian and Egyptian effort towards their case, he said.

Erekat commented on Israeli Prime Minister Benjamin Netanyahu’s latest claims about how Palestinians caused the holocaust: “What does it mean when Netanyahu accuse us of committing the Holocaust? He wanted to say that Israelis hate the Palestinians more than they hate the Nazis”.

About security coordination with Israel, Erekat said the Palestinian government decided to reconsider any security or economic cooperation with Israel. “We will not be the only side who commit to the agreements”.

The international community, including both the US and Russia, verbally opposes the Israeli settlements, but Erekat questioned the ability of those countries to stop Israel from doing it.

Erekat arrived to Cairo on Saturday to meet both the Egyptian Minster of Foreign Affairs Sameh Shoukry and Secretary General of the Arab League Nabil El-Araby.

The Egyptian Ministry of Foreign Affairs said in a statement that Erekat informed Shoukry of the latest talks with Kerry in Amman.

In the West Bank, clashes between Palestinians and Israelis continue despite of calls for peace. Manar Al-Madane, a journalist based in Palestinian city of Nablus, told the Daily News Egypt that the situation is still tense. “A girl was killed today in Hebron just because they suspected that she may have a knife,” she said.

She said another young man is seriously injured after being shot by Israeli settlers.  The Israeli army closed several regions in Hebron and Jerusalem.