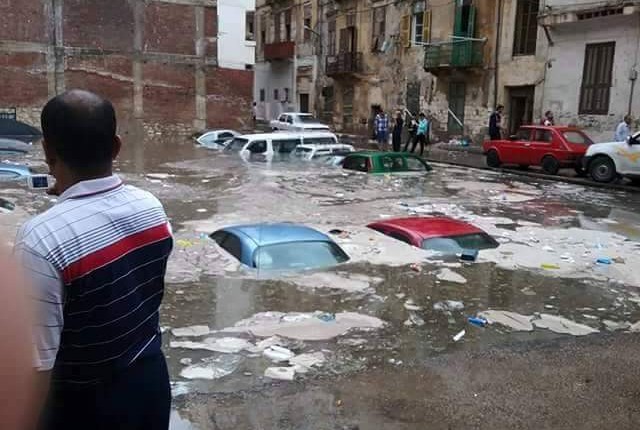 President Abdel Fattah Al-Sisi met with the cabinet Monday to follow up on efforts to assess damage of water flood in Alexandria after heavy rainfall on Sunday.

In a review on the efforts done and reasons behind the crisis, it rained continuously for nine hours with unprecedented rates with 3.2 million meter cubes of water in only three hours, according to presidency spokesperson Alaa Youssef.

He also reviewed the process of sending compensation to the affected families. The government’s strategy is to improve quality  to be ready for similar crises before it unfolds and stressed on regular maintenance for facilities and proposed a plan to improve them urgently.

The death toll from the rain rose to seven people, according to the administrative prosecution, including children. One horse drowned from the flood that covered the streets, homes, cars, and hospitals. Roads and train stations, as well as the Corniche, were flooded from excessive rain.

Armed forces sent additional nutrition aid and blankets to support casualties in Alexandria on Monday in collaboration with the northern military area and the directorate of social solidarity. The city’s drainage system remains ailing.

On Sunday night, trucks with pumps were sent to absorb water floods from the ground of the main streets and squares in Alexandria.

Alexandria governor Hany Al-Messairy resigned after he was attacked for allegedly being ‘laid back’ while dealing with such a major crisis. His deputy is now appointed temporarily.

The storm on Sunday the second in the city this fall after the one in early October, which also paralysed the entire city and slightly flooded the streets. During a meeting with Prime Minister Sherif Ismail after this first storm, Al-Messairy warned against another flood and proposed to acquire funds of EGP 75m to maintain the current drainage stations and roads. Ismail said he will provide the funds next winter of 2016.

Citizens agreed that the streets are currently much better than Sunday but that further protection measures should be taken to avoid similar crises.

“The water in main streets was absorbed but there are still some remote districts that might be suffering,” Reem El-Taib, who used to work with the governor in the civil action committee, told Daily News Egypt.

In her capacity as coordinator between the governor and civil society workers in Alexandria, Al-Taib said that during a meeting early October after the first storm, the drainage authority director Yousry Al-Emary said Alexandria does not have a rain drainage system but only sanitary sewers. There are hundreds of illegally built towers that put pressure on the current existing drainage system capacity to support all citizens, let alone rain floods.

Alexandria needs a budget to install a new drainage system or update the current one and cover remote areas, which is nonexistent, according to Al-Taib.

On Sunday the administrative prosecution spokesperson Mohamed Samir said in an official statement that “the floods incident indicates huge shortcoming in the local management of the city and its following entities”.

An extensive investigation will be launched to review the incident after proposing the needed documents to the technical office of the prosecution, the statement added.

Every winter, Alexandria faces at least 18 rain storms, according to the general authority of Alexandria port.

“We have previously witnessed accidents because of rain, hail hitting cars, and across different locations, balconies falling down on cars, and other homes drowned but not deaths,” El-Taib concluded.

Whereas, Fawzy I., a student from Alexandria said, “many people feared going out Sunday because of the storm. I have been living here all my life and this is the first time we hear people dying because of the rain. If it rains on Monday as well, the city would have flooded again, just like Sunday”.

Shaheer G., who used to work for the popular traffic mobile application Bey2ollak in Alexandria, said the “social media was behind the awareness of many people on the crisis this year in particular, which resulted with the governor resigning. Most streets are still very muddy”.

The weather forecast authority warned of further weather turbulences, notable decrease in temperature, and turbulence in the maritime transport.

The authority spokesperson said during a phone interview, “we have been already warning of this turbulence since a month ago.”