Besides the large number of independents’ in the runoff elections, political parties also managed to make it in a number of constituencies. Amid the retreat of Al-Wafd Party in many governorates, the Free Egyptians Party (FEP) and Future of a Nation Party (FNP) were able to advance and are often close in candidates’ numbers.

According to Emad Raouf, FEP’s political bureau member, the party is competing in several constituencies against 15 members of FNP and another 15 candidates of Al-Wafd Party.

“The main competitors now are those three and Al-Nour Party,” Raouf told Daily News Egypt on Monday. “We are competing against the latter in Alexandria and Beheira, and with the rest in Upper Egypt, but there are some alliances formed on the local level.”

Raouf stated that FEP is coordinating with Future of a Nation in some constituencies, but “strongly competing against it” In others. FEP is strongly present in Assiut, Aswan, Luxor, Sohag, Giza and Minya. They are not in Fayoum as they “had little chances there”, according to Raouf.

Similarly, Ashraf Rashad, Secretary-General of Future of a Nation, confirmed allying with FEP and others. “This depends on how we are doing in each constituency. Accordingly, we coordinate with political parties or independents,” Rashad told Daily News Egypt. 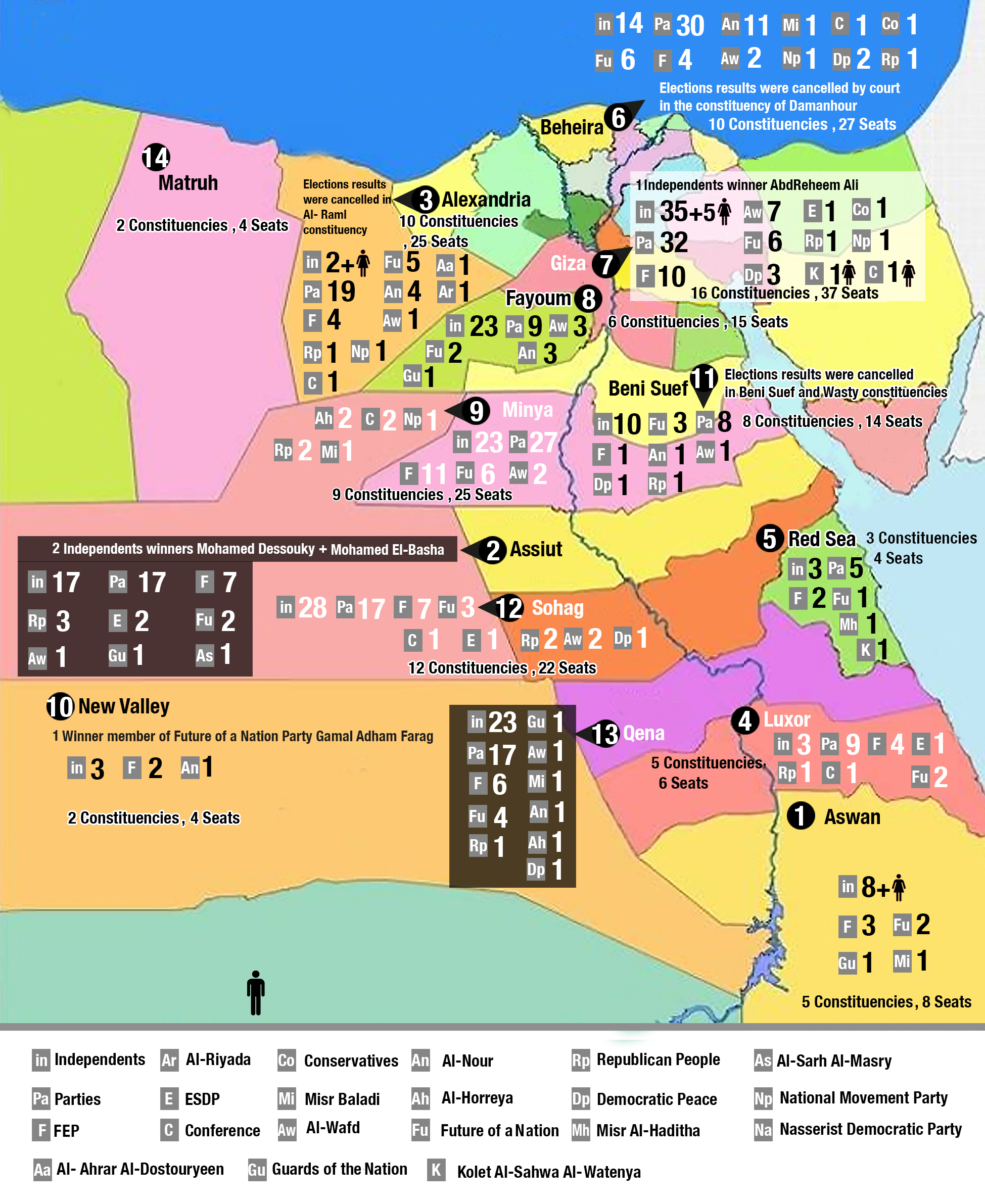 FNP is mostly present in Qena, Minya, Beni Suef and Giza, and also in cancelled constituencies in Alexandria and Beni Suef.

“We are not really worried about competition because we believe that making it to the runoff with such numbers is satisfactory,” Rashad said.

Most importantly, in Alexandria and Beheira, FNP is facing Al-Nour Party. Despite Al-Nour’s loss in the lists, party members are still competing for individual seats in half of the governorates only, particularly focused in Fayoum with six candidates where it is competing with three others from Al-Wafd Party, two candidates from ‘Future of a Nation,’ all of them competing against 23 independent candidates.

One hotspot for Al-Nour Party is Al-Amreya constituency in Alexandria where six candidates are competing for three seats. The highest percentage of votes went to independent candidate Rizk Ragheb with 45.9%.

However, Al-Nour Party has three candidates in the three consecutive following ranks as the second in position Ahmed Khairallah obtained 40.5%.

“FEP’s only candidate there automatically formed a coalition with the remaining two independents for mutual endorsement, against Al-Nour Party,” said Raouf.

In the rest of Alexandria, FNP has five candidates and FEP has four, and Al-Nour Party also has four candidates. Al-Nour has the most candidates after independents in Beheira, equal to Al-Wafd, FEP and FNP all together.

Rashad said FNP put efforts into communicating more with voters, explaining their programme and on top of all “reinforcing the idea of a civil party away from religious fascism,” he added.

Other less known political parties have made it with less candidates to runoff elections such as the Egyptian Social Democratic Party (ESDP), the Republican People Party, Al-Sarh Al-Masry Al-Hor, the Democratic Peace Party, the Freedom Party, the Conference Party and the National Movement Party.

The first round took place on 18 and 19 October, but results issued by the Supreme Electoral Commission (SEC) were appealed by candidates before courts, revealing several procedural and technical errors such as ineligible candidates who acquired votes that would affect final results.

Women are almost absent from individual seats, especially in Upper Egypt governorates, while maintaining little presence (five candidates) in Giza. They were included more on the closed lists, where “For the Love of Egypt” won 60 seats.