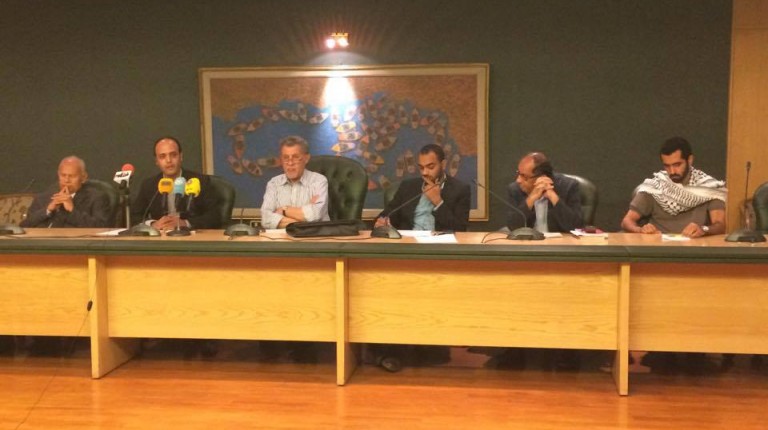 The Press Syndicate organised a seminar, featuring prominent figures, at its headquarters on Monday, where the prospects of a Palestinian intifada were discussed and possible means of providing support.

Speakers at the seminar included prominent Palestinian thinker and historian Abdel Kader Yassin, as well as journalist Karem Yehia and Abdel Rahman Abu Salem, member of the Boycott, Divestment and Sanctions (BDS) movement. The talk was moderated by Mahmoud Kamel, the rapporteur of the Cultural Committee at the syndicate.

In its concluding statement, the syndicate affirmed its support to the Palestinian resistance, embodied in the recent surge in violent resistance in several areas in the occupied territories. It further mentioned that the Palestinian issue is a wholly “Arab” issue, and asserted the need for an “Arab strategy”, without which the Palestinian movement cannot succeed.

The statement also acknowledged that there were some “excesses” by media outlets and personnel regarding the Palestinian issue, however those do not represent the entire Egyptian media apparatus, which has always supported the cause.

Palestinian historian Abdel Kader Yassin first addressed the controversy surrounding the naming of the movement taking place in Jerusalem since the beginning of October, whether it was an intifada or not, noting that it is considered the 18th revolutionary movement since 1918, when Great Britain occupied Palestine.

Yassin suggested that the current protest movement has the potential of turning into an intifada, once the Palestinian factions begin to join the movement, adding that without a unified Palestinian leadership and strategic Arab support, an intifada cannot materialise.

“Notably, most of the revolutionary youth belong to the ‘Oslo generation’, which enjoys a bad reputation amongst [the Palestinian factions],” said Yassin. “Negotiations have been ongoing for almost a quarter of a century now, with no one benefitting from them except Israel, as it claims to the international community that it wants peace, while building more settlements and causing more destruction on the ground.”

With the balance of power largely inclined towards Israel and a lack of weapons on the Palestinian side, Yassin said the youth had to resort to knives and drive-by attacks to resist.

“We do not posses any strong cards when entering negotiations,” said Yassin. “We do not reject settlement, but we are unable to negotiate one. Israel is enforcing a zero-sum game.”

Other methods of resistance

BDS member Abdel Rahman Abu Salem spoke about the boycott campaign and how it can serve to support the cause, listing previous accomplishments that were associated with the campaign. The highlight of those accomplishments was the campaign to boycott Mobinil until its parent company Orange drops its business links in Israel.

Tension in the Occupied Territories since early October

On the same note, the Cairo Institute for Human Rights Studies (CIHRS) released a statement Tuesday expressing its concern regarding the wave of violence taking place in the occupied Palestinian territories and Israel since 2 October.

Violence between Israelis and Palestinians has escalated over the past month, amid speculations of a possible third intifada.

Human rights organisations have documented several cases of Palestinians seemingly shot without posing a threat, according to the CIHRS statement.

Since 2 October, more than 61 Palestinians, the majority of whom are below 20 years old, have lost their lives as a result of extrajudicial killings, and the excessive use of force in confronting demonstrations, including through the use of live ammunition.

Meanwhile, 11 Israelis have been killed in Palestinian attacks so far, Reuters reported.

Referring to the UN Security Council’s resolution 242, the CIHRS demanded the immediate withdrawal of Israeli forces and settlers from Occupied East Jerusalem and the handing over of authority to the Palestinian government. It further called for investigating all human rights violations, and dispatching international forces that will secure the withdrawal phase in the interim period.

The violence was initially re-ignited by Palestinian anger over what many saw as Jewish encroachment on Jerusalem’s Al-Aqsa Mosque compound. Israeli police has been imposing restrictions over access to the holy site for “security reasons”, amid heightened tensions.

International initiatives to stem the bloodshed have not been fruitful so far. Clashes between Palestinians and Israelis have continued despite calls for peace.