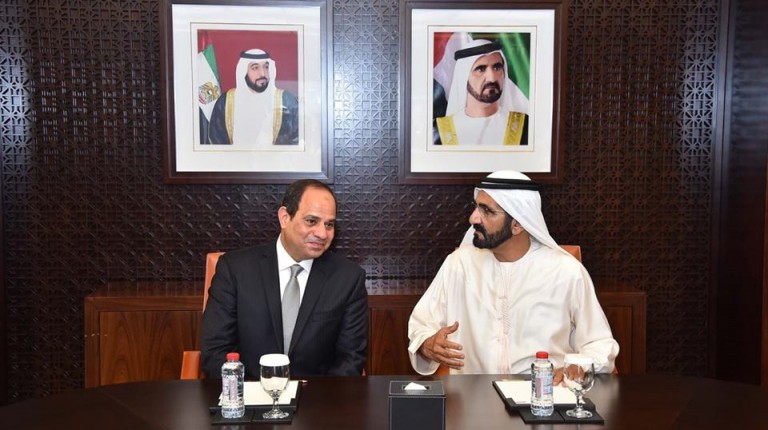 Egyptian President Abdel Fattah Al-Sisi began a tour on Tuesday to the United Arab Emirates, Bahrain and India, the Egyptian presidency said in a statement.

Al-Sisi’s first stop was the UAE where met the Crown Prince of Abu Dhabi Mohammed bin Zayed Al-Nahyan, to discuss the crises in the Middle East and possible solutions.

During the meeting, the strategic partnership between Egypt and UAE was highlighted, and both parties confirmed its importance and the need for further partnerships.

Regarding the Middle East crisis, the officials discussed the Arab coalition support for the legitimate government in Yemen and its role regarding confronting the hostile situation in the country. They reviewed the coalition’s efforts to secure Bab Al-Mandeb Strait and promote the development of global trade.

Furthermore, both sides discussed the recent developments in the Palestinian issue and how to protect the Palestinian people from Israeli attacks. In addition, they analysed the Libyan crisis and the UN efforts to find a peaceful way to end the conflict.

Al-Sisi also met with the Crown Prince of Dubai Mohammed bin Rashid Al-Maktoum and discussed the importance of enhancing cooperation between Egypt in UAE in various aspects including the economic and investment fields, to serve the interest of the both states.

Al-Sisi’s next leg of the tour will be India to attend the Third India-Africa Forum Summit. He will then head to Bahrain to meet with King Hamad bin Issa Al-Khalifa for another round of bilateral talks.