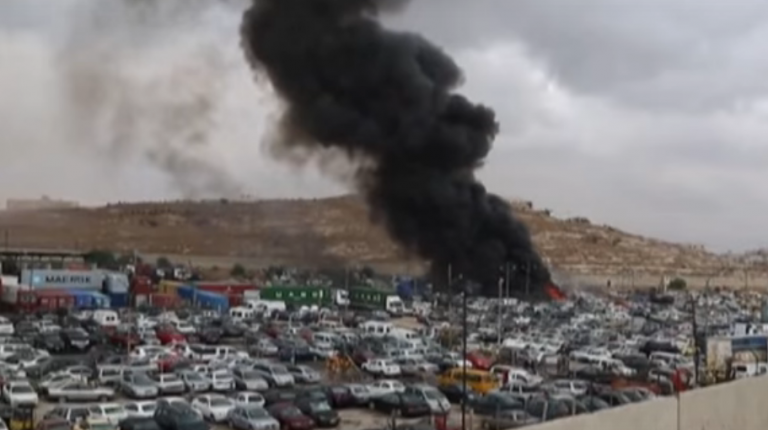 The plane carrying the bodies of the five Egyptian victims of Al-Aqaba’s explosion in Jordan arrived at Cairo International Airport Wednesday.

The Egyptian embassy in Amman supervised the transportation of the five victims – Fares Ramadan, Nabhan Abdel Haleem, Hammam Abdel Moatamed, Ahmed Gamal Bakr, and Saady Omar to Queen Alia – to the airport to bring their bodies back to their relatives in Al-Ghanaiem, Assiut, the Jordanian Ministry of Interior said in a statement.

Jordanian authorities are now investigating the accident of a fireworks container explosion that caused their death, two Jordanians, and injured thirteen and eight Egyptians, a security Jordanian source told the Daily News Egypt.

The container was banned from entering Jordan because Jordanian law prohibits the import of fireworks and fire crackers. It was left in customs until it is transported outside the country.

The Egyptian Minister of Immigration and Egyptian expatriates Nabila Makram, currently visiting the injured Egyptians in Amman, said Jordan will include the families of the Egyptian victims in the local social security programme.

By joining this programme, the victims’ families will receive compensation and pensions from Jordan.

The Jordanian Minster or Labour Nidal Al-Qatameen said after his meeting with Makram, Jordanian law guarantees the rights of both dead and injured Egyptians workers.

Jordan will retroactively add both the killed and the injured Egyptian into their social security in case they were not covered, director general of Jordanian social security Nadia Al-Rawabda said.

The social security will also cover the costs of the injured Egyptian until their full recovery.

5 Egyptians killed in explosion in Jordan