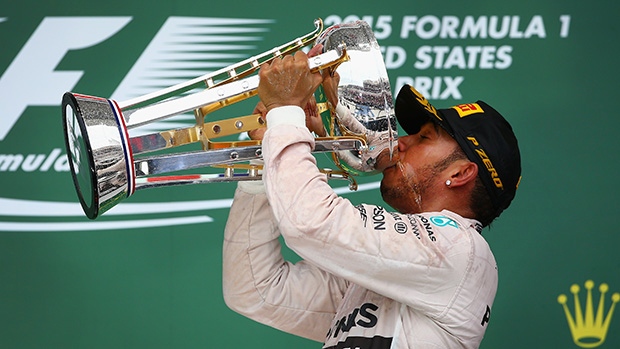 British Mercedes driver Lewis Hamilton was crowned Formula One Champion for the third time in his career, and the second in a row.

He landed the title of the Formula One US Grand Prix against his German teammate Nico Rosberg, who finished second in the race as a result of deviating from the track in the final laps of the race. Hamilton took advantage if this to resolve the race in his favour, with 1:50:52, while Rosberg finished 2.8 seconds later.

By winning the championship, Hamilton becomes the 10th driver to win the title three times during his professional career, and entered into a new challenge to match the number of his German rival Sebastian Vettel, who won the title four times.

Ferrari driver Sebastian Vettel needed to achieve at least second place in the US race, to maintain his chances to compete for the title of the Formula One World Championship, but he finished third, behind the two Mercedes drivers, and 3.3 seconds after Hamilton.

Hamilton used his intelligence on his way to the title, as his teammate Rosberg was forced to let go of first place after the first corner. Rosberg dropped to fifth place, but succeeded in returning to the competition in the race and reached second place by the eighth lap, surpassing both Australian Daniel Ricciardo and Russian Daniil Kvyat.

The race witnessed more than one car accident, as German driver Nico Hülkenberg’s car collided with that of Australian Daniel Ricciardo, resulting in Hülkenberg’s withdrawal from the race. Another major accident happened to Russian Daniil Kvyat, when he lost control of his car on the 43rd lap and crashed into the side barriers.

The ranking of the top 10 drivers in the Formula One US Grand Prix came as follows: