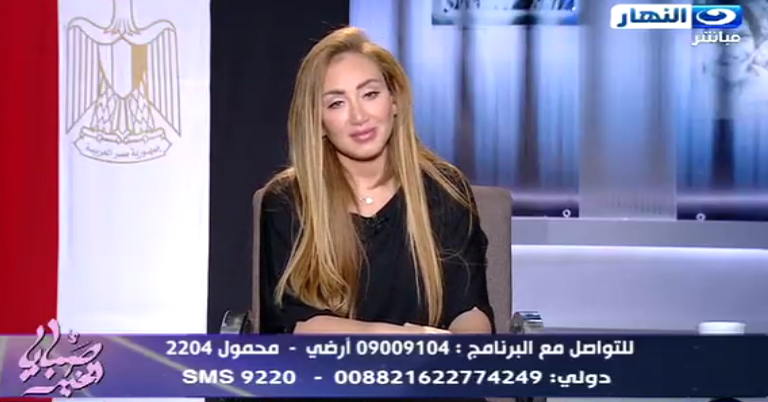 The “I Saw Harrasment” initiative released a statement Thursday, calling on all state institutions to sue the controversial TV host Reham Said for libel.

The initiative’s statement came following a wave of public outrage at Said’s actions, after she aired the private photographs of a girl who was assaulted by her harasser, on her Sabaia Al-Kheir programme on the privately-owned Al-Nahar channel.

The issue began on Tuesday, when footage of a woman who was assaulted in a mall circulated on social media. The woman was invited for a TV appearance with Reham Said, who questioned the validity of the woman’s account, and proceeded to air private pictures of her.

The woman later alleged that the pictures had been stolen while she was charging her phone at the studio.

The initiative said in the statement that Said violated several laws by airing the photographs without the girl’s permission, and blaming the girl’s revealing clothes for the assault.

The initiative added in the statement that it not the first time Said libels a female victim of sexual violence.

In February 2015, Said libelled a girl who was raped, accusing her of “immorality”, adding that she was not raped but she rather that she was in a relationship with the accused and consented to sexual relations with him.

The statement pointed to the Universal Declaration of Human Rights, which confirms that privacy should be protected, and that the Egyptian constitution is responsible for protecting people from such violations.

“I Saw Harrasment” concluded the statement by addressing Prosecutor General Nabil Sadek, calling on him to take all the legal procedures against Said and to directly follow up with the case until the issuing of a final verdict, as he has the authority to “investigate and accuse”.

They also addressed Amr Al-Kahky, the owner of the privately-owned Al-Nahar channel, to take immediate procedures against Reham Said for explicitly violating the privacy of several survivors of sexual violence.