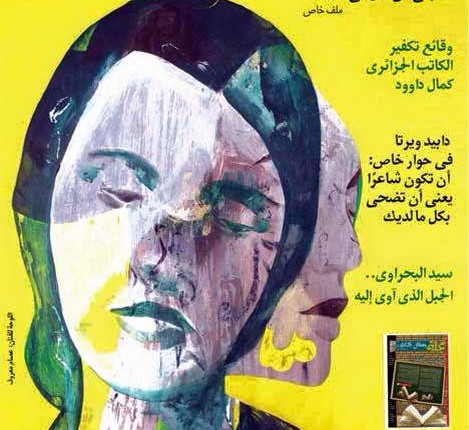 A journalist and the editor-in-chief of a newspaper run by state-owned Akhbar Al-Youm news organisation were referred to a criminal court on Saturday for publishing and writing an article with “obscene sexual content”.

The detained journalist, Ahmed Nagy, wrote in Akhbar El-Adab, a literary journal affiliated with Akhbar Al-Youm. A chapter of his novel “Use of Life” appeared in the literary journal, after having already been published by Dar El-Tanweer publishing house.

The prosecution said the published content “violates the sanctity of public morals and general ethics”. It added that Tarek El-Taher, the editor-in-chief, confessed during questioning that he only reviewed the title of the story and he did not review the whole text.

El-Taher purportedly said: “I would not have allowed publishing it if I had read it all.”

“The action includes many violations, one of which is that the person who made the court claim has no legal authority to do so,” said Gamal Eid, director of the Egypt-based Arabic Network for Human Rights Information (ANHRI) in comments to Daily News Egypt. “Literary news stories shouldn’t ever be judged by court, they can only be criticised by writers and intellectuals.”

Eid added that such cases shouldn’t be referred to court as the journalist didn’t commit a crime; he just used his imagination while writing the novel.

Writer Sherif El-Shobashy agreed with Eid, saying “that the case is an example of fighting the intellectuals and scaring them in order to prevent them from creativity”.

El-Shobashy told Daily News Egypt that those who claim that they are angels and defend public morals are the ones who have no ethics at all, but “fake morals”.

“I am really sad to hear this bad news. Political Islam is coming back wearing a new mask as defending morals and fighting obscenity.”

El-Shobashy added that, in this way, creativity is confined as intellectuals and writers will be limited in their writings. That’s why courts shouldn’t allow such a thing to take place, he said

“There are new incidences of fighting creativity and judging writers for their creativity,” said Khaled El-Balshy, a board member of Egypt’s Press Syndicate and the head of its Freedoms Committee, in comments to Daily News Egypt. “We should encourage intellectuals to produce unique writings not judge them and send them to court.”

El-Balshy described the case as “strange”, as the person who made the complaint was not hurt or negatively affected by the novel.

“We witnessed many incidences where newspapers published a whole novel not just a chapter. For example, the state owned Al-Ahram newspaper published the novel entitled ‘Awlad Haretna’, written by Naguib Mahfouz and nothing happened,” El-Balshy added.

El-Balshy called for confronting the attacks on journalism and strongly defending writers and journalists, so as to prevent the suppression of freedom of expression.

Meanwhile, the trial of over 40 defendants labelled as “Muslim Brotherhood members” resumed Sunday, as they are accused of killing young female journalist Mayada Ashraf, who was shot dead in violent protests last year involving security shootings.

Other charges of illegal protest and violence are included in the case, and it remains one of the few legal cases brought up for the retribution of journalists, besides the case of Al-Hosseiny Abu Deeif who was killed in the Itihadiya clashes of 2012.

El-Balshy’s words align with the statement of UN Secretary General Ban Ki-moon, on the occasion of the International Day to End Impunity for Crimes on 2 November.

“Such impunity deepens fear among journalists and enables governments  to get away with censorship. We must do more to combat this trend and make sure that journalists can report freely,” said Ban Ki-moon.

This comes as increasingly alarming international reports are issued regarding journalists’ safety and press freedom at risk all over the world. “More than 700 journalists have been killed in the last decade simply for bringing news and information to the public,” the UN Secretary General stated.

“Many perish in the conflicts they cover so fearlessly.  But all too many have been deliberately silenced for trying to report the truth,” said Ban Ki-moon, adding that “only 7 percent of such cases are resolved, and less than 1 crime out of 10 is even fully investigated.”

Even in countries where advances have been made in press freedom, journalists are squeezed between violent extremists and security services sensitive to criticism, mostly by the introduction of new restrictive legislations on the press.

In Tunisia, a draft bill that would criminalise “denigration” of police or other security forces and anti-terror legislation was approved in July, allowing for prison sentences of up to five years for anyone found to have praised a terrorist act, the CPJ reported.

A similar law has been passed in Egypt, known as the anti-terror law. It included an article which sought to put journalists behind bars for publishing “information contradicting official data”, amid much controversy and pressure by the Press Syndicate to amend the law.

In August, the prison term was substituted with a heavy financial fine, unaffordable by the majority of journalists, and restrictions on publishing were reduced to “military affairs” instead of the previous term, which was deemed by many to be “vague”.

“Journalists should not have to engage in self-censorship because they fear for their life,” Ban Ki-moon said.