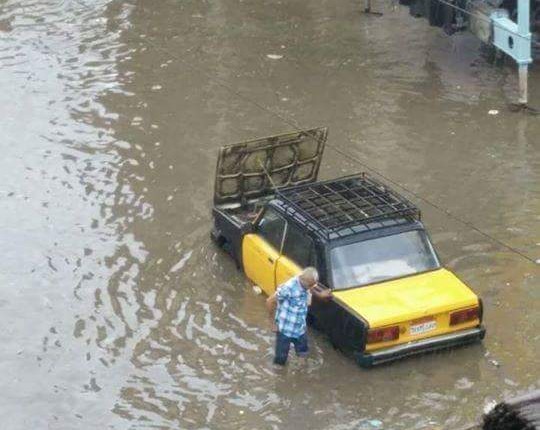 The rains in Wadi El-Natrun city in the governorate of Beheira flooded the town of Affona, damaged its buildings, killed five and injured 16; three of whom are still recovering in the hospital and 13 of whom were discharged.

One person was killed in Kafr El-Dawar in Beheira. Alexandria witnessed heavy rains, which caused “lakes” and damage in numerous areas of the city. Youth at Abu El-Mamter in Beheira organised a campaign entitled ”Help Them” to assist security forces and rescue the affected families.

Governor of Beheira Mohammed Sultan said he has been in Wadi El-Natrun since 3 am after being informed of the incident.

Cabinet spokesperson Hossam El-Kawish said the civil defence forces evacuated 100 people from Affona after their building collapsed due to the floods, and they were sent to a hospital for treatment.

El-Kawish said the armed forces sent 20 water suction cars to the affected areas in the three governorates, noting that petroleum companies in Alexandria assisted in dealing with the situation.

A sewage company in Alexandria sent 14 water suction cars to absorb the accumulated water from the streets and under subways and bridges, according to head of the company Mahmoud Nafaa.

He said an emergency state was declared in 134 lift stations and another 18 alert and treatment stations in all the areas of the company.

As a result of the floods in Alexandria, all tram lines were damaged due to short circuits. The Alexandria Port Authority closed the Bani Ghazi and Mandara and Cleopatra subways. There were serious traffic jams in various streets in the city.

Prime Minister Sherif Ismail called on the governors of Beheira and Alexandria to check on the situation and the availability of necessary preparations to deal with the situation, according to the prime minister’s statement.

El-Kawish said Minister of Health and Population Ahmed Emad El-Din ordered the provision of necessary methods to drain accumulated water by coordinating with the neighbouring province. He also ordered outsourcing equipment from water and sewerage companies in Beheira.

Ismail requested from Minister of Local Development Adel Labib to follow up on the situation with the governors of the affected provinces and directed Minister of Social Solidarity Ghada Wali to observe the damage caused by heavy rains in the provinces. Through her ministry, Wali provided food, blankets, and tents to the affected people in the three governorates.

Ismail delegated the governors of the three governorates to give vacations on Wednesday or Thursday to governmental sectors employees and to school students. The Deputy Governor of Alexandria ordered Thursday off.

The floods in Beheira, Alexandria, and North Sinai on Wednesday were expected since it was previously announced that Egypt will witness heavy winter this year, urban activist Atef Amin told Daily News Egypt. The state did not prepare for this.

Advancing and repairing the weak popular areas are listed as the government’s priorities. “We have sufficient capacities and several businessmen who can contribute and help,” Amin said.

“The Ministry of Health and Population is not capable to cover all the population problems in Egypt and also tackle the slums area issues,” he said.

“Therefore we should get rid of the Minister of Urban Renewal and Informal Settlements and bring back former minister Laila Iskander’s projects to develop these areas,” Amin added.

This is the second time in two weeks that heavy rains flood Alexandria. The floods previously damaged streets and killed five people, including children, as well as one horse. It also damaged several building, streets, cars, and a hospital.

The number of deaths due to weather conditions in Egypt this year increased significantly. In August, at least 100 people died from a nationwide heatwave, according to the Ministry of Health’s reports.

According to state media, the heavy rains flooded Kafr El-Sheikh streets and turned it into ‘pools’ of water, stopping the traffic in the fishing port in Borollos centre and preventing framers from gathering their cotton, which resulted in financial losses.

Gharbeya also witnessed rains in most parts of the governorate, which accumulated water on the streets and caused traffic jams.