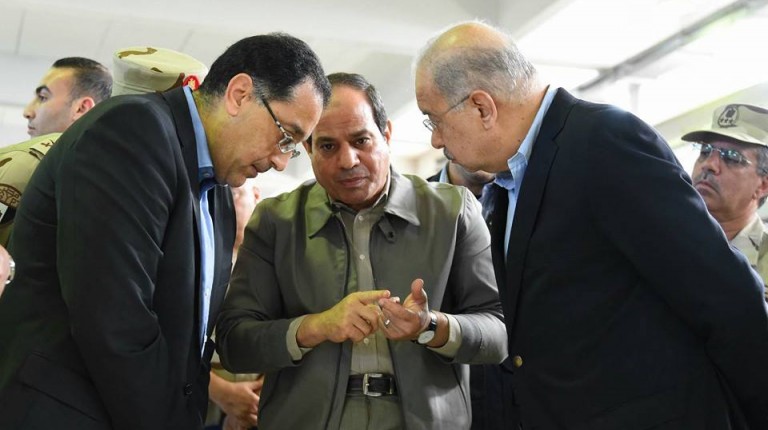 By Menan Khater and Sarah El-Sheikh

During President Abdel Fattah Al-Sisi’s visit to Alexandria, hundreds of hospital patients were stranded and transferred to other hospitals after water trucks failed to absorb the flooded waters, while citizens in other parts of the city were struggling to find food or go to school.

During his visit, Al-Sisi announced the allocation of EGP 1bn from the “Tahya Misr” fund and EGP 75m from state budget to work on maintenance within 10 days.

Daily News Egypt spoke to families in Al-Amerya district of Alexandria to take a closer look at the floods’ aftermath.

“The situation is still deteriorating. We are using boats to get food to our families,” said Mohamed Salah, one of the residents. “The apartments on the lower floors completely drowned, so said residents went to stay on the roofs.”

No deaths or injuries were reported but the buildings are gradually deteriorating, according to Salah. Another citizen, Osama, expects more deaths as the drains in the town are left uncovered and any person could fall into them, especially children.

“Worms are thriving in the accumulated water, and may cause Bilharzia,” resident Mohamed Eid from the same district said.

The three residents said no officials have visited them except for a few journalists. The sewage company sent three cars on Saturday but they were not enough or qualified to absorb all the accumulated water.

They also mentioned that so far they have not received any monetary assistance from the government, but that one businessman visited them on Saturday and distributed food to the residents.

Ahmed Salah, a doctor who works for Al-Abbaseya psychiatric hospital and member of the health authority, told Daily News Egypt the patients of Maamoura hospital were transferred last night to eight other hospitals, including Abbaseya, Khanka, and Banha, after the trucks failed to absorb the water from the hospital dorms.

According to Salah, the hospital staff have been in the hospital for four days since the electricity shut down, and are barely able to move inside the hospital, struggling to provide food for patients. “The water increased up to 60 cm in depth,” he said.

The hospital had about 800 patients, 250 of whom were released back to their families, and 500 others were unable to reach their families and were transferred to other hospitals.

Independent NGO, the Maat Foundation, previously called on Alexandria officials to contribute immediately to evacuate patients and the employees in the hospital, and stressed on the necessity of repairing the hospital’s infrastructure.

In a statement released on Saturday, Maat said the Psychiatric and Neurological Hospital in Maamoura received several complaints from employees’ and patients’ families about the sewage water that covered the hospital floors for the third consecutive day, without any intervention from officials.

Salah said trucks came to the hospital but failed to get rid of the water. He suggested this could be a drainage problem since the hospital is already located below sea level.

He mentioned that the hospital faced many losses, not only inside the patients’ dorms, but also in the kitchens and the pharmacies since the psychiatric patients have lived in the hospital for several years.

Deaths from flooding are a yearly phenomenon, with many coastal and Delta cities flooding during the winter season. It is widely believed that the poor infrastructure is the cause for the repeated yearly floods and deaths.

Maamoura development to be completed within 3 years