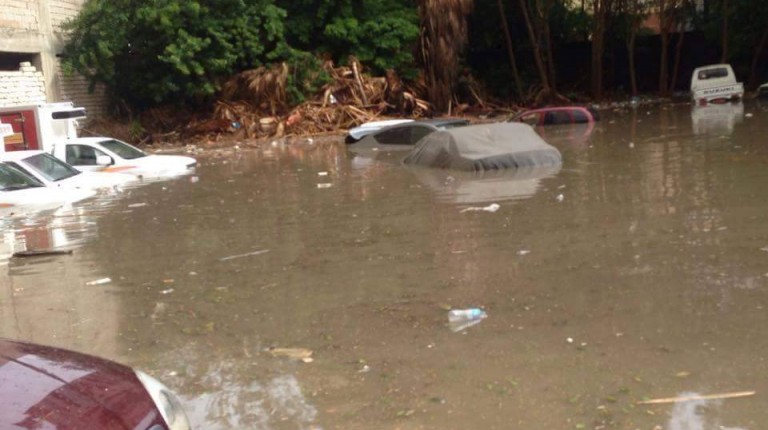 The government allocated EGP 75m to treat the sanitation system problems in Alexandria, said Prime Minister Sherif Ismail, to contain the repercussions of heavy rains witnessed by the governorate in the last few days.

Ismail requested the acting governor of Alexandria, Souad Al-Khouly, to form an emergency group that meets on daily basis to follow up the water drainage procedures, according to the cabinet spokesperson, Hossam El-Kawish.

Meanwhile, during his visit to Alexandria on Friday, the Prime Minister requested that the Minister of Housing, Mostafa Madbouly find radical solutions for the problems of low income citizens, who live in houses that are suffering from severe water accumulation. Ismail also requested haste in the implementation of the two Thalathiny and Siouf plants.

Heavy rains have hit several governorates, including Behiera, Alexandria, Cairo and Giza causing flooding in a number of houses and the death of a number of citizens. The incidents were caused by the accumulation of water in the streets, due to the limited capabilities of sanitation networks in water suction.

“The Prime Minister demanded from the head of the Drinking Water and Sanitation Company in Alexandria, that all sanitation plants operate efficiently, besides the water suction and sweeping cars,” according to El-Kawish. He added that Ismail also demanded to provide a sufficient number of drivers, refusing to rent water suction cars from private companies in order to save financial resources.

Moreover, he demanded focusing on the significantly troubled zones, such as the Mandara area and 45 tunnel, Alexandria’s desert road entrance, in addition to zones with houses of levels lower than the drainage system, inhabited by low-income citizens.

Ismail said the armed forces have significantly contributed to treating the floods’ effects and the accumulation of water in Alexandria and a number of other governorates, in addition to cooperating with other concerned government authorities.

“The rise in the water level in a number of drainages led to the drowning of a number of agricultural lands,” said Al-Khouly. She added that the governorate moved to contain the crisis according to its capabilities and capacities.