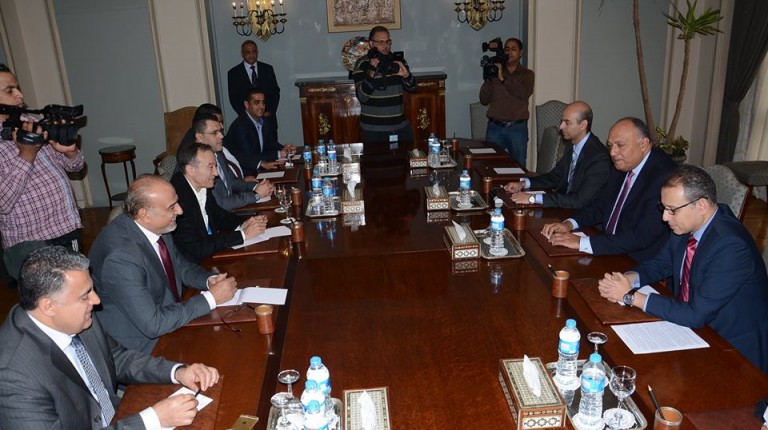 Egyptian Foreign Minister Sameh Shoukry met with the follow-up committee of the Cairo Conference for the Syrian Opposition Saturday, where the Syrian conflict was discussed.

The Syrian opposition’s two-day conference held in June outlined a code of conduct for the transitional period, covering a wide range of issues on the political, social and military levels, as well as the refugee crisis.

Shoukry stressed during the meeting that the only resolution for the Syrian conflict is a political resolution, coupled with the continuation of the fight against terrorism in Syria and the region, Foreign Ministry spokesman Ahmed Abu Zaid stated.

The Syrian opposition delegation affirmed its keenness on reaching a political solution, based on successive regional and international agreements, the latest of which was during the Vienna talks.

Shoukry further reflected on the outcome of the Vienna talks that took place on 30 October, and highlighted their importance with regards to the resolution of the Syrian conflict.

The Vienna talks on Syria were an extension of the four-way talks held in Vienna a week earlier by the United States, Russia, Turkey and Saudi Arabia. However, they failed to reach a conclusion. A decision was then taken to broaden the participants to include regional countries such as Egypt and Iran.

The talks were concluded by the proposal of a nationwide truce between Syrian President Bashar Al-Assad’s forces and the rebels, with the participants calling for the renewal of a UN-led peace process.

A day after the Vienna talks, UN Secretary General Ban Ki-moon warned that disagreements over the fate of Syrian President Bashar Al-Assad must not impede efforts to end the four-year Syrian civil war, and that Al-Assad’s future must be decided by the Syrian people.

However, substantial differences remain among the participants in the international talks. A major point of contention is Al-Assad’s role in the transitional process.

Russia and Iran remain the Syrian president’s main backers, while the US, its Gulf Arab allies and Turkey have called for his swift removal. Egypt however is attempting to balance between politically supporting Russian airstrikes against “Islamic State” targets due to strategic interests, while diplomatically supporting Saudi Arabia’s stance towards the issue.

Shoukry and the Syrian delegation were in agreement that the Geneva I communiqué signed in June 2012 represents the “main reference” upon which the political process agreed upon in the Vienna talks was established.

The Geneva communiqué stipulated the formation of a transitional government composed of members of Al-Assad’s government and opposition figures, paving the way for free elections. The agreement did not attempt to impose a process on Syria that indicates Al-Assad should step down, a fact that was deemed favourable by Russia at the time.