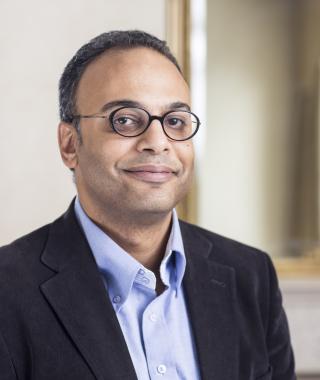 The arrest of journalist Hossam Bahgat caused widespread anger among human rights activists and journalists in Egypt. Despite his relatively young age, he became one of Egypt’s top investigative reporters and an icon in defending human rights on many levels.

Bahgat graduated from the Faculty of Economics and Political Science and founded a local observatory for research and assistance in human rights known as Egyptian Initiative for Personal Rights (EIPR) from 2002 to 2013.

During his work in EIPR, amid heavy restrictions on activism during Hosni Mubarak’s rule, Bahgat expanded the concept of human rights to new unexamined areas such as freedom of religious minorities, Coptic rights, physical freedoms, homosexual rights, and civil and political rights.

Before he launched the EIPR, a high-profile case involving the arrest of 52 suspected gay men on a boat restaurant on the Nile in May 2001 “proved to be the real tipping-point for Bahgat”, according to an interview made with him in 2009.

The trial, which was later known as the “Queen Boat”, trial received limited support at the time. In response, Bahgat published an article criticising the lack of support to the case, which then resulted in his dismissal from the Egypt Organisation for Human Rights (EOHR).

In recognition of his work in human rights, Bahgat received the 2014 Katharine and George Alexander Law Prize from Santa Clara University School of Law. The award honours top legal advocates who have used their careers to help alleviate injustice and inequity. Further, in 2010 he received the Alison Des Forges Award for Extraordinary Activism from Human Rights Watch.

He followed his passion in journalism and joined Mada Masr team as an investigative reporter. Using his previous background and skills in research, Bahgat managed to pull-off a series of groundbreaking investigative reports on various, yet very controversial, issues.

His latest report was “A Coup Busted?” which reveals documents about the military trial of a group of military officers who attempted and failed to launch an inside coup. He also published an investigation on Hosni Mubarak’s mansions, which tackled the Mubarak family’s squandering of public funds.

Aware of the risks he faces in publishing such reports, he decided to proceed with them anyways because “people have the right to know”, according to his colleagues in Mada Masr.

He also writes press reviews for Mada with a critical twist on ongoing events and issues. Previously, he used to write columns for the privately owned Al-Shorouk newspaper.

He received a one- year scholarship in journalism at one of the world’s most prominent journalism schools, Columbia Journalism School in New York City, from 2013-2014. He was also present in many international and regional events on journalism.

During the 2014 Arab Reporters for Investigative Journalism (ARIJ) forum in Amman, he stated: “There are many journalists in Egypt who are courageous enough to do certain controversial stories, but they often do not find editors who have the guts to publish them.”