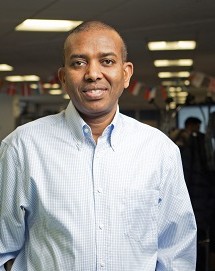 WorldRemit, the global money transfer app, currently enables more than 300,000 transactions per month and is available in 52 countries and more than 125 destinations. It raised $140m from Accel Partners and TCV, according to its CEO and founder Ismail Ahmed.

Daily News Egypt spoke with Ismail about the company’s declaration about launching money transfers to Egypt via mobile.

WorldRemit is a global money transfer app that changes the way people send money through an easy process through the app or the website without any agents. We transfer money to most countries in an instant and send money like an instant message. The company is available in 52 countries and more than 125 destinations.

WorldRemit’s global headquarters are in London, UK with regional offices in the US, Canada, Japan, Australia, and New Zealand.

How many Egyptian remittances is the company targeting?

In 2014, Egyptians abroad sent about $19bn in remittances to friends and family at home. The vast majority – more than 90% – of those transfers are still sent in cash through high-street agents. WorldRemit takes this archaic market online by offering customers the advantage of sending money using a smartphone, tablet, or computer from the comfort of their home.

What are the other services provided by WorldRemit?

WorldRemit also allows Egyptians abroad to send an airtime top-up to friends and family on Eitsalat, Mobinil, or Vodafone networks.

What size are the company’s investments and capital?

In early 2014, WorldRemit secured a major $40m series A funding round led by prestigious venture capital firm Accel Partners. In less than a year, we raised another significant $100m investment from Technology Crossover Ventures and Accel Partners to propel our rapid growth. Accel and TCV are both early backers of Facebook, Spotify, and Dropbox.

Do you have any concerns about the small number of Egyptians who pay electronically?

If you look at trends in human behaviour and the many problems associated with cash, I think it is clear that we will see more people starting to pay electronically. Digitising financial services is not only about added security but about convenience for people who need to send, receive, and manage money.

You mentioned before that Africa outweighs the West in remitting money; which countries in the African and Arab markets send the most remittances?

Nigeria and Egypt are two of the world’s 10 major recipient nations in terms of remittances, receiving $21bn and $19bn respectively in 2014, according to the World Bank. What is the value of fees levied on the amounts to be remitted?

WorldRemit charges a small, upfront fee per transaction typically at a much lower cost than traditional offline money transfer companies. Exact fees depend on the sender country and destination.

What is the amount of remittances by the company last year and in the first half of 2015?

We have seen a trajectory of rapid growth over the past year. Today, we process more than 300,000 transactions per month.

What are the currencies of remittances the company will allow for Egyptian remits?

Our service is already available in more than 50 countries. We allow people to pay for their transfers using most major currencies, including US dollars, British sterling pound, Emirati dirham, Swedish krona, and euros.

How do you guarantee reduced risk of online remittances?

Online remittances are safer and more secure than paying for a money transfer in cash at a physical location. As a compliance advisor to the United Nations East Africa Remittance Programme, I saw first-hand how traditional offline money transfer companies are struggling to comply with the stringent Anti-Money-Laundering and Counter-Terrorism-Financing regulations introduced after 11 September in 2001. By not accepting cash and focusing on digital remittances, WorldRemit is significantly reducing risks both for our business as well as for our customers.

Do you think the Egyptian pound devaluation against the dollar and the decrease of foreign exchange will affect the remittances process?

Of course, people who send money are sensitive to changes in the foreign exchange rate and we have in the past seen people delay before sending money until the rate works in their favour.

How will the company compete with Western Union in the Egyptian market?

Last year, the Africa Progress Panel, chaired by former UN Secretary-General Kofi Annan, denounced the “Remittance Super Racket” of traditional offline money transfer companies, arguing that those companies’ overcharge costs for Africans with more than $2bn every year in unnecessary fees. We have previously called out against anti-competitive practices and overcharging by traditional money transfer companies, especially across the Arab and African markets.

How many Egyptians use Mobile Money?

Mobile Money services, also known as mobile-wallets, have seen exponential growth around the world in recent years. According to Groupe Speciale Mobile Association (GSMA), active Mobile Money users shot up from around 30 million in 2012 to more than 100 million at the end of last year, the majority of which are in Sub-Saharan Africa. Today, Mobile Money is also regarded as an important opportunity for Egypt’s large unbanked population, with new services now catching on. WorldRemit is already the world’s leading provider of remittances to Mobile Money, sending to 52 of the world’s most successful Mobile Money services and planning to connect with all of them.