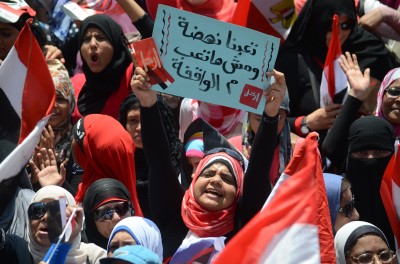 Sameh Ashour was elected head of the Lawyers’ Syndicate after winning the majority of votes Monday, with his contender Montaser Al-Zayat vowing to appeal the results.

According to an official papers from the committee entitled to observe and administer the elections, Ashour got 22,987 votes, while Al-Zayat got 17,120 votes.

This marks the fourth time for Ashour to head Egypt’s oldest professional syndicate.

Al-Zayat, who is known for his Islamist affiliations, rejected the results, adding he will file a lawsuit to stop the elections. He said in a statement that he will go to the prosecution to report violations and bribery that took place in the elections.

After the release of the officials results, Ashour said “calls of terrorism and division and inciting have fallen in the Lawyers’ Syndicate”. He added that he welcomes all lawyers who voted for him and those who did not, asserting that “he is working for the sake of the profession of law and lawyers”.

He added that lawyers succeeded in preventing the “Muslim Brotherhood from reaching the syndicate”.

Montaser Al-Zayat is a prominent lawyer who has been defending Islamist groups since their rise in the 1980s. He is part of the defence teams in many cases where Islamists are involved, the most prominent being the Ajnad Misr case.

He is the lawyer for former president Mohamed Morsi. His programme included more legal rights for lawyers, with him vowing to stop all violations against lawyers, who he asserted were subjected to several attacks.

He took a leading role in the crisis that occurred in 2010 between lawyers, judges and prosecutors, when two lawyers were given prison sentences after being accused of assaulting a local prosecutor in Tanta. At the time, thousands of lawyers held a full strike and sit-ins for several days nationwide, which further heightened the tension between lawyers on the one hand and prosecutors and judges on the other.

He is also a political opponent of former head of Judges’ Club and current Minister of Justice Ahmed Al-Zind. He is also among the lawyers who have been criticising the syndicate for monopolising the decision-making process.