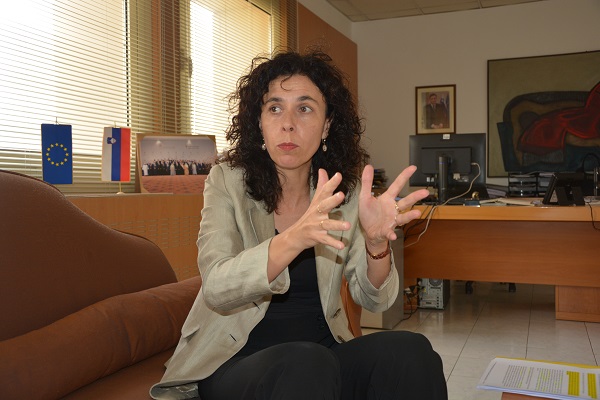 After the Legatum Institute released its annual global Prosperity Index report, which ranked Slovenia as the 25th most prosperous country in the world, Daily News Egypt sat down with Slovenian Ambassador to Egypt, Tanja Miškova, to learn about this small country, and about the bilateral relations between Egypt and Slovenia.

Miškova spoke about the relations between Slovenia and Egypt throughout history, and her perceptions on future relations, especially in regards to the much-needed environmental solutions that Slovenia can offer Egypt.

An Egyptian Embassy in Slovenia was established in 2007, but Slovenia had already opened its embassy in 1993. Shouldn’t it have been a reciprocal act?

Egypt and Slovenia are very different countries. Egypt is much bigger and is considered a significant regional power. Slovenia on the other side is a country of 2 million people and it is newly independent. When we opened an embassy in Cairo, Slovenia was two years old. At the time, it was very important for us to have diplomatic missions in the most important regional capitals and our diplomatic mission in Cairo was one of the first missions outside Europe.

Egypt already had more than 100 embassies all over the world, so we understand that it took Egypt some time to discover its interest to open an embassy in Slovenia. I think this happened especially after we joined the EU and the NATO.

Can you give us a brief about the efforts of Egypt’s first ambassador to Slovenia to promote Egyptian culture?

After the novel “Yacoubian Building” was translated, Faruk created a literary night in the presence of the famous Egyptian writer Alaa Al-Aswany, to celebrate the book’s translation. So he put Egypt on the map in Slovenia and he did it in a very positive way.

So how about the translation of Arabic literature to Slovenian and vice versa?

The work done is not nearly enough, but I hope, through the efforts of both embassies, to increase the number of books translated from Arabic to Slovenian and vice versa. We are a nation that likes reading and Slovenians are always curious to read authors from different cultures. As far as I know, we are the second country worldwide when it comes to published books per capita.

Al-Aswany’s book and “Taxi”, for example, are two of the most read books in Slovenia, especially among youngsters. Naguib Mafouz is also very well-known there.

There was an agreement between Egypt and Slovenia in 1997 to develop economic relations. Based on this agreement, the former Slovenian priem minister, Janez Drnovšek, (1992-2002) visited Egypt in 1999. Why did such visits not go further in developing bilateral relations?

Afterwards we had several visits. For example, former Slovenian prime minister Borut Pahor (2008-2012) visited Egypt in 2009, and we were preparing for a presidential visit in addition to a cultural week in 2011, but unfortunately situation then in Egypt was not suitable.

On both sides, the environments were not stable. In Egypt, the political situation was not stable, while in Slovenia, since 2008, the economic and financial crisis that affected Europe also affected us, as we are part of the EU. We had negative growth and trade went down. As a result, cooperation slowed down and there were no more visits.

Last year, the situation in both countries started to stabilise and our growth rate was 2.5% which reached 3% at the end. Growth rates are continuing positively this year as well. Our exports increased last year and Egyptian exports to Slovenia also increased.

And what does Slovenia import from Egypt?

We import petrochemicals and agricultural projects, such as potatoes and grapes.  Last year, a large amount of imported grapes from Egypt was recorded, going through our port to all the European markets.

Can you give us a brief about the Slovenian economy and how it is present in the Egyptian market?

Our economy is diversified and it is based on the small and medium-sized companies specialised in many industries.  We have a very developed automotive industry, as we are very good at producing car parts; 70% or more of the cars produced in Europe have from one to 10 parts that were produced in Slovenia.  We focus on improving existing products rather than coming up with large important products to present something different to the international market.

We have a company specialised in producing water pumps for irrigation, called Litostroj. It has been present in the Egyptian market for more than 40 years as it established a prestigious name and reputation here in Egypt.

What other possibilities do you see regarding economic cooperation?

I see that we are developed in agricultural technologies and we have excellent expertise in storage facilities.

We had discussions with the Egyptian Ministry of Supply regarding our storage capacity for agricultural products, as large amounts of agricultural products are lost due to bad storage in Egypt. We could offer multiple solutions to solve this issue, with which to benefit Egypt.

Regarding water technologies, we have very good expertise and three research institutes that deal with water and environment technologies, which succeeded in attracting EU projects. I believe we are able to implement sanitation and water treatment projects needed in Egypt. I also believe that the Egyptian government will direct a lot of investments in the future years to infrastructure sanitation and water, and many Slovenian companies are interested in participating.

Can you brief us about the cooperation between the Slovenian Port of Koper and other Egyptian ports?

Koper’s Port has a long established cooperation with Damietta’s port, and especially Alexandria’s port. In this regard I would like to mention that the Chairman of Alexandria’s Port had visited Koper’s Port, as far as I remember last June, where they agreed on new cooperation projects and even applied for a joint EU-funded project.

About the New Suez Canal project, if trade from the Far East is facilitated through the canal, that means more ships for Koper’s Port thanks to its strategic location in Europe. I believe it is also important for Egypt’s imports and exports, especially to save perishable and agricultural goods.

Koper’s port was chosen in one of the conferences held in Egypt in 2009 as one of the best functioning ports. So Egypt recognises its importance and the Slovenian Embassy organised, in cooperation with the port of Koper, an event called the Day of Port of Koper, last March. It was celebrated in Cairo and next year it will be celebrated in Alexandria and Damietta as well.  Sixty-seven Egyptian companies participated in this event. The Egyptian deputy minister of supply and transportation also attended the event. The Egyptian side proved its interest to set strategic connections, as both countries are very well placed strategically.

How is Slovenia aiming to participate in the New Suez Canal?

We still need more concrete information about future plans. I believe Slovenian companies can be engaged in projects regarding engineering, water treatment, and interior cooperation as we have efficient companies that can equip office buildings and hotels. These companies had successful experiences in Saudi Arabia. Slovenian companies are also among the top ones internationally when it comes to storage facilities’ technologies.  We have efficient IT solutions. As we are a very environmentally conscious nation, we have very efficient environmental solutions companies, I once spoke to a water technologies’ export and he complained that our waste water is not dirty enough as Slovenians are very conscious about water usage and about how they treat the environment.

How can Egypt benefit from Slovenia regarding environmental solutions?

The Egyptian Ministry of Environment expressed its priorities regarding wasted energy, water treatment and recuperation of industrial areas. From our side we prepared a list of Slovenian experts to participate in this exchange of expertise, and workshops to be held in Slovenia and Egypt, in response to the ministry’s request.

What is the most significant achievement involving Slovenia and Egypt within the Union for the Mediterranean (UfM)?

Both Slovenia and Egypt are very active members in the UfM since they became members and we hope to remain active.

We managed to achieve our own project, named the Euro-Mediterranean University, considered one of the UfM priority projects. The university has a seat in Slovenia and now it is chaired by an Egyptian professor called Abdel Hamid Al-Zuhairy. It is mainly a network between the Mediterranean universities to implement joint projects and now it is also introducing post-graduates’ study programmes.

Al-Zuhairy is putting a lot of effort as in June a centre for Middle Eastern Arabic and Islamic studies were established, a field that is not common in Central and Eastern Europe. The Slovenian government was very enthusiastic about this centre and provided it space. Due to the misconception about Arabs and Islam, and the fact that the Arab and Islamic community is very tiny in Slovenia, this centre is very important as it aims to organise seminars and workshops for the Slovenian public to know more about the true Arab and Islamic world. It will include also training for future diplomats who will serve in Arab and Islamic countries.

Speaking about Slovenia within the EU, was it a good choice for Slovenia to change its currency to the euro?

The tolar was our first national currency in history. It was expected after the crisis of the euro-zone that Slovenians would complain, but we did not. We are small country that cannot depend only on its market as our economy is oriented to exportation. Most of our GDP comes from exports and this is how we came out of the crisis.

Was it easy for Slovenia to join the EU?

We started the process in 1994 and we joined in 2004. We joined with nine other central European countries, including the Czech Republic and Slovakia. We had to make several reforms. When we joined the EU it was kind of painless, and it was a very small transition as we were strongly prepared. We were even considered one of the best-prepared countries at the time.

And was it a good decision to join the EU?

One of the biggest promises was the scientific field; we have this enormous open space which offers funded and joint scientific projects, enabling us to work with different European research institutes. Also Slovenian students are able to move freely in the EU countries and stay there for six months in favour of their studies.

Most of the infrastructure built, sewage, roads, water treatment and schools were co-financed by EU funds.

After the head of the Slovenian Ethnographic Museum’s visit to Egypt in 2009, what were the activities organised between Egypt and Slovenia in cooperation with this museum?

In 2014, I attended an exhibition, which was inaugurated by the Egyptian Ambassador in Slovenia, for Egyptian amulets in the Ethnographic Museum in Ljubljana. In the opening there was a large crowd and the exhibition was well visited.

Schools in Slovenia encourage these kinds of exhibitions, as Egyptian history is included in the history lessons taught in Slovenia.