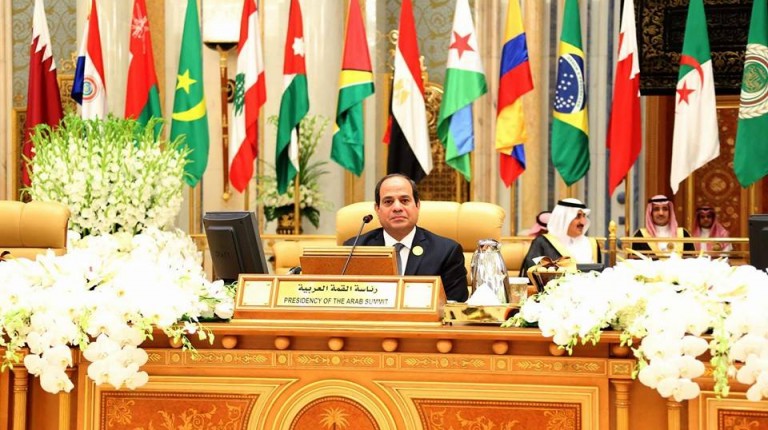 Egypt called for a political resolution to the conflict in Yemen at the sidelines of the Arab-Latin Summit in Riyadh, Saudi Arabia.

President Abdel Fattah Al-Sisi reviewed with his Yemeni counterpart Abdrabuh Mansur Hadi the latest security updates in Yemen and the progress of the United Nations-sponsored talks between different Yemeni parties.

Yemen has been witnessing rising conflict between Shi’a rebel militants, the Houthis, and the Hadi government, which escalated September 2014, when the former took over the capital Sana’a. In response, Saudi Arabia has led a string of airstrikes against Houthis since March, supported by Egypt, Gulf Cooperation Council countries, and Pakistan.

In his meeting with Hadi, Al-Sisi highlighted the importance of reaching a political resolution and restoring the legitimacy of Yemen’s government based on the UN Security Council resolution/2216 and the GCC agreement.

“The acknowledgement of a political resolution is in the Yemeni’s people interest; if the war extends it will also complicate the humanitarian crisis among civilians,” Al-Sisi said.

Al-Sharkawy, who is based in Saudi Arabia due to the conflict in Yemen, said: “There is positive progress on the political resolution, which Egypt is pushing for, along with GCC countries and the 18 accredited ambassadors temporarily based in Riyadh.”

Egypt’s role in the Yemeni conflict has been widely criticised by Houthis, as well as civilians.

“Those who started the violence should also initiate to stop it; otherwise all talks will not led to any positive outcomes,” Deif Al-Shamy, a member in the Houthis communication committee, told Daily News Egypt Wednesday.

“Key elements should be present in negotiations: there should be respect for the country’s independence and respect for the peace agreements, instead of mobilising paid soldiers from different countries,” Al-Shamy said.

The conflict in Yemen has left 2,355 civilians dead and 4,862 injured, the majority due to coalition airstrikes, according to UN documentation as of late September.

“Disregard for human life by all parties continues. Airstrikes and other shelling in and around Hudaydah port were in clear contravention of international humanitarian law and are unacceptable.”

Human Rights Watch (HRW) also documented the names of more than 300 civilians who died, many of them children.

Their research shows that many coalition airstrikes that have killed civilians violated the laws of war. It also documented that artillery rockets and shells fired by Houthi forces have killed and wounded civilians, though in far fewer numbers.

As ships en route between the GCC and the Mediterranean pass through Yemen’s coastal waters, the country’s security status is crucial for several countries, especially oil exporting ones. Yemen has a history of conflict and division attempts between the north and the south.