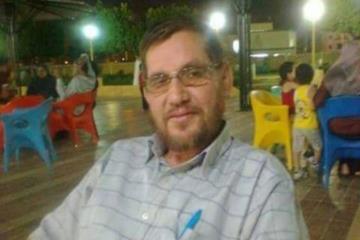 Waheed Ramadan, a prisoner at the 10th of Ramadan Security Forces’ detention facility, died Monday in what family members claimed was neglect by prison officials in providing adequate medical care

Ramadan, 59, a member of the now-dissolved Freedom and Justice Party (FJP), who was set to be released next December, died in police custody while receiving medical care in Zagazig Public Hospital in Sharqeya, his wife Azza Attallah said Wednesday.

Attallah said he died due to “medical negligence”. She added that the family made several requests for the authorities to release him “as he is suffering from stomach and kidney problems, but the requests were refused”.

Ramdan was accused of distributing anti governments flyers and belonging to an illegal group. He was sentenced, after appealing the original five year prison sentence, to one year and an EGP 1,000 fine.

Ramadan was arrested last December in front of his work place while renewing his vacation.

Attallah added that they “presented many documents proving his illness but in vain. Every time he went to the trial and appeal sessions, he was carried by fellow defendants”.

She also criticised the long period taken to transport him from prison to the hospital, and the time taken to transfer him from one hospital department to another. She pointed out that in many cases they family offered to do the examinations in private hospitals, and their requests were denied.

The Egyptian Coordination for Freedoms and Rights said the prisoner was denied the entry of necessary medications. The Ministry of Interior was contacted to comment on the incident, but a representative was not available for clarification.

Following his death, thousands in 10th of Ramadan City in Sharqeya attended the funeral of Ramadan, chanting against the army and the current government, demanding “retribution for the martyr”.