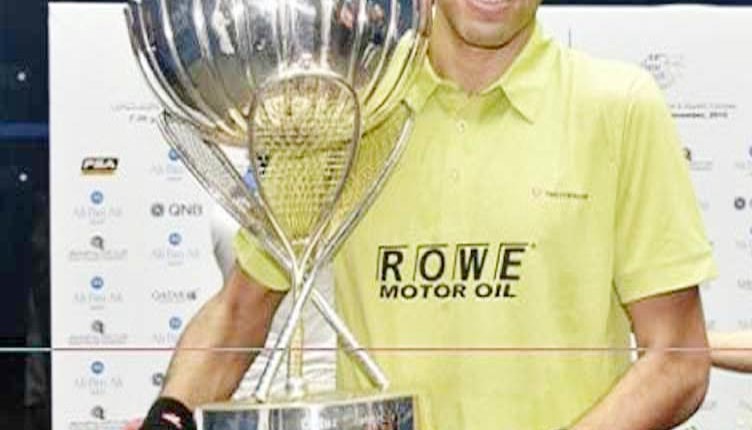 This is El-Shorbagy’s fourth win this year in the PSA World Tour competitions after winning the J.P Morgan Tournament of Champions in the US, the British Open and the Britain Grand Prix. As for Gualtier, he won three competitions this year, the first of which was the Grasshopper Cup, then he won the China Open and the US Open.

In 2015, El-Shorbagy played six finals, winning four of them, while this is his second win over Gaultier, as they played against each other in the British Open and the Egyptian pharaoh won.

During his journey to win the Qatar Classic Championship, El-Shorbagy achieved five victories. The first of those was defeating Qatari player Abdulla Al-Tamimi in the first round with scores of 9-11, 4-11, 9-11. In the second round, he defeated his compatriot Mohamed Abouelghar with scores of 6-11, 8-11, 3-11.

Meanwhile, world number one Raneem El-Welily left the championship early, when she was surprisingly defeated by Indian Joshna Chinappa during the championship’s first round with scores of 11-9, 4-11, 11-6, 11-9.

The Qatar Classic Championship title is Massaro’s third win of 2015, as she has already won the Macau Open and the US Open. As for Egyptian Nour El-Sherbini, she only won one competition in 2015, the Carol Weymuller Open in the US earlier this month.