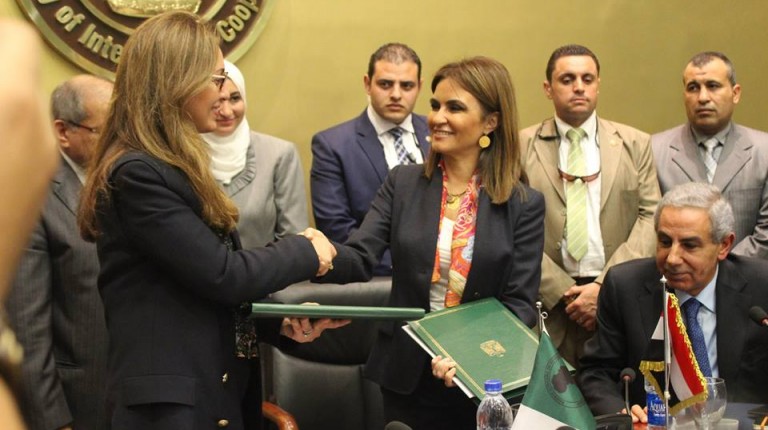 Egypt’s Minister of International Cooperation Sahar Nasr signed two agreements for grants with Leila El-Mokkadem, representative of the African Development Bank (AfDB) in Egypt, with a total value of $2.25m.

The first $1m is to contribute to alleviating the burden of victims of heavy rains that plagued the country, especially Alexandria, while the other grant, amounting to $1.25m, is for a project affiliated to the Central Bank of Egypt (CBE) to settle depositing systems of securities.

Nasr also signed a €50.2m loan agreement with the AfDB to contribute to funding the third phase of the National Programme for Sanitation.

Regarding helping the victims of heavy rains, Nasr explained in a statement that the grant will be divided into two branches; the first one will be in-kind aids such as distributing blankets and foods to the victims, which will be executed with the municipalities in Alexandria.

The second branch will be providing emergency pumps and cleansing and disinfecting sewage networks through using specialised vehicles and equipments.

Beneficiaries of the programme will amount to 5,000 families, each including five members. The expected time to carry out the activities will be six months.

The AfDB provided Egypt with a grant of $650,000 in September to finance the first phase of the required initial feasibility studies for the establishment of a cross-continent shipping line connecting the Mediterranean Sea to Lake Victoria.

In May, the AfDB provided the project with $90m, with a further $50m expected to be officially provided by the bank in the near future.

The AfDB started its operations in Egypt in 1974, and it is currently participating in the financing of more than 35 projects with total funding of approximately $1.9m. The projects financed by the bank are in the electricity, agriculture, transport and airports sectors, amongst others.

Nasr also said in the statement that Ministry of International Cooperation is finalising a new project, with the value of $500m, with the World Bank, in order to develop villages in Upper Egypt and “contribute in supporting the state budget”.

In early November, Sahr told Daily News Egypt that the World Bank agreed to raise Egypt’s portfolio from $5.5bn to $6bn, increasing the bank’s commitment to support a number of projects in the country.