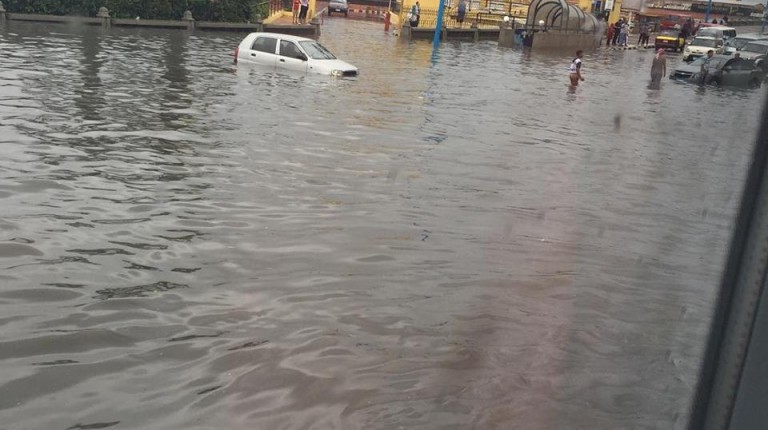 “After the heavy rainfall that damaged some villages in the governorate of Beheira, our homes are damaged, the cracks widened in the ground, and livestock and birds drowned,” says Sheikh Ragab, a resident of one of the drowned villages. The residents are waiting for their homes to collapse at any time and are afraid of falling in those cracks or losing their livelihood.

The threatened homes are very basic, without water or sanitation connections, since the villages are remote and excluded from the government’s developmental plan.

They do not have an electricity connection provided by the governorate, but they still receive fines on bills for non-payment. “We are anticipating the rain to collapse our ceilings over our heads because the government does not do anything for us,” Ragab said angrily. “The government has no capacity to tackle the next potential downpour.”

“We took the responsibly to connect these villages with water and electricity,” said NGO volunteer Samar El-Shaboury. Volunteering NGOs deliver basic services to the remote villages in Beheira, especially in Nagaa Awn, Tolombat, and Setat Asra.

Villages like these have no space in the governorate’s plans, especially remote villages such as Batn Al-Baqara and Istabl Anter. In Batn Al-Baqara, there is no sanitation connection, just trenches (room underground for collecting wastewater).

El-Shaboury said the land absorbs the trenches’ wastewater, which leads to the collapse and cracks in the village homes and leads to dangerous diseases.

Beheira was no less damaged than the governorate of Alexandria in the latest heavy rains that hit the coastal governorates of Egypt.

The rain caused more than 16 deaths, including vt drowning and electrocution, and 95 were injured in Beheira, according to official governmental statements.

Undersecretary of the Ministry of Housing in Beheira Ibrahim El-Shemy said the floods and rains led to the sinking of 95 houses and 50 agricultural acres, according to the planning and follow-up team in the area.

The Ministry of Water Resources and Irrigation announced that the amount of rain that fell in the two days last week in the governorates of Alexandria and Beheira was more than 700m sqm. This unprecedented amount, equivalent to the amount of rainfall in a full year, is too much for the sanitation connection to absorb.

In Alexandria, many homes drowned as a result of accumulation of water in the streets due to poor drainage network; a situation that has not changed the second downpour.

The government allocated EGP 75m for Alexandria to be prepared for floods by fixing and maintaining sewage networks and developing electricity networks.

President Abdel Fattah Al-Sisi visited Alexandria and announced an allocation of EGP 1bn from the Tahya Masr (Long Live Egypt) Fund for the development of the sewage system in Alexandria and Beheira.

Chairman of Alexandria Sewage and Drainage Company (ASDCO) Mahmoud Nafi told Daily News Egypt that the company is currently working to avoid the problems that led to the flooding of a number of regions in the governorate in the last rainfall and that the company is ready for the next one.

The infrastructure in Egypt collapsed due to no planning or maintenance plans, Suez Canal University professor of crisis management Muhammad Bagha told Daily News Egypt. The recent rainfall was an alert to the government for the failure of infrastructure, which we saw when people were electrocuted and the accumulation of water damaged roads and homes.

The government does not have scientific or comprehensive plans for crisis management, but rather manages the aftermath of the crisis.

“Remedy crisis is more expensive than crisis prevention because instead of allocating EGP 75m for Alexandria to maintain sewage networks, the government could have spent only EGP 20m before the winter season to maintain these networks,” Bagha said. “The deterioration of infrastructure, the state’s neglect and lack of supervision, and the spread of slums were a major cause of the crisis.”

There are about 60, 000 buildings that are illegal in Alexandria and the encroachment on agricultural lands make them very vulnerable to flood in the next downpour.

“There are 27 governorates, 4,475 villages, and 33,000 areas in Egypt with incomplete informal structure and lack of basic services and infrastructure,” Bagha said.”The causalities are not the humans alone, but also in the tourism sector, which was already damaged since the 25 January Revolution because of the photos of sunken cities’ all over the Internet worldwide that frighten the tourists”.

This comes at a time when the government increased the tax burdens on citizens, which amounted to EGP 422.3bn in the current FY, compared to EGP 317.8bn in the last FY 2014/2015. This is an increase equivalent to 32.8% but it is not reflected in the improvement of infrastructure in the governorates of Egypt.