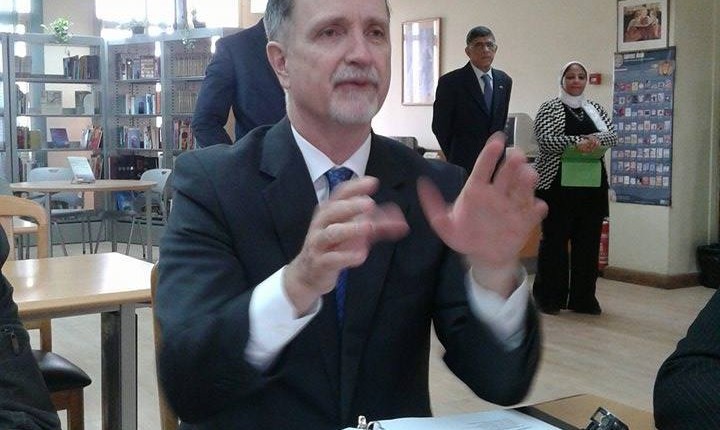 In an interview with Daily News Egypt, US Ambassador to Egypt Stephen Beecroft discussed US economic investments in Egypt, and the volume of trade between the two countries.

He further discussed the terrorist acts worldwide, most lately the attacks in Paris, as well as the effects of the Russian plane crash on Egypt’s economy and tourism.

Were Egyptian-US relations affected by the fall of the Russian aircraft in Sinai two weeks ago?

We hope this would not affect Egypt on the political and economic level. We hope the Egyptian administration would accelerate the development of the tourism industry in Egypt.

I personally requested that the embassy staff visit monuments in Cairo, Luxor and other places, and this is a message that Egypt is a safe country and what happened is a mere incident.

How do you view the spread of terrorist acts in the world lately, especially after the attacks in France?

The whole world is exposed to the plague of terrorism. The US has condemned the incident in France, which has harmed all countries of the world, and not only for France.

Egypt expressed its sympathy with France through lighting the pyramids with the French flag colours. Terrorism harms all the peoples and countries of the world.

How do you view the mechanisms of eliminating terrorism?

An important part of eliminating terrorism is developing the economy. The US, through the US Agency for International Development (USAID), financed entrepreneurship to eradicate terrorism and to support the economy and support the fight against terrorism.

Are the problems faced by developing countries the result of lack of attention to developing entrepreneurship?

It is hard to say, but entrepreneurship helps create jobs and create a state of stability, and it is important to develop the business sector by promoting entrepreneurship, as it works on the development of the economies of developing countries.

What was the volume of trade exchange between Egypt and the US last year?

Trade exchange between Egypt and USA totalled $7.9bn, divided over $1.4bn Egyptian imports to the US market and $6.5bn of the US exports to Egypt in 2014.

Both countries aim to increase trade between them during next year.

How can the trade exchange between the two countries be boosted?

Increasing the trade exchange between Egypt and the US can be undertaken through expanding in industries included under the QIZ agreement, as it exempts products entering the American market from customs. However, those industries should not be limited to clothing, but should expand to include food industries among others.

Egypt, Israel and the United States signed in 2004 the Qualifying Industrial Zones (QIZ) agreement to open up the American market to Egyptian exports, as the market can absorb more than a third of the world consumption without being bound by the quota system – provided that these products follow the rules of origin and use the agreed-upon ratios of Israeli inputs.

What is the main factor behind increasing US investments in Egypt?

Political and economic stability, in addition to developing the energy sector in Egypt. Egypt is a leading country in the Middle East, and its stability supports the region as a whole.

Has the US government issued any warnings to its nationals in Egypt following the downing of the Russian airliner?

Absolutely not. We have not issued any warning to our nationals in Cairo. I want to affirm that the travel ban to Sharm El-Sheikh is only temporary until the investigations led by Egypt find the reason behind the crash.

The US encourages its citizens to visit Egypt for its tourist landmarks spread around the country, in Luxor, Aswan, Cairo, Alexandria and other cities.

Personally, I called on the embassy staff to visit monuments in Cairo and Luxor to send a message that Egypt is safe, and that it was only a onetime incident.

Have US companies exited from Egypt following the 25 January Revolution and the 30 June protests?

Not at all. US companies are still operating in the Egyptian market. There are shared interests between both countries. We should continue to strengthen the economic relations between Egypt and the United States.

I met with the chairman of the US company General Electric. Last week, I also met with the head of the F-16 company. I am keen to meet with US companies to give them an accurate picture of the investment climate in Egypt.

What economic initiatives is the US working on through the USAID programme?

The United States has announced investing $45m in new programmes to support companies and small enterprises in Egypt, and to train students to compete for jobs.

Programmes offered by USAID in partnership with the Ministry of International Cooperation aim to meet the demands of thousands of entrepreneurs and technical schools students over four years.

The Student Employment Experience Development (SEED) programme receives funding of about $22.9m that will be granted in January 2016 and over four years. The programme aims to provide technical support to small enterprises across Egypt to help them obtain funds and develop new commercial ideas, as well as conducting market research

The programme serves a number of business sectors, especially the small projects owned by women.

Besides that, $22.1m will be directed to finance a new educational programme under the name of Workforce Improvement and Skills Enhancement (WISE); it supports the quality of education in Egyptian vocational schools.

How big are USAID’s contributions in Egypt since it was established?

USAID contributed more than $35bn in economic aid to Egypt since its establishment and until the end of the current fiscal year.

Are there any other projects carried out by USAID?

The projects included lowering groundwater around the Great Pyramids and the area of Sphinx.

The US announced an educational initiative worth $230m last April, to last over four years until 2019. The aim of the initiative is to help students complete masters and PhD studies with the help of US scholars.