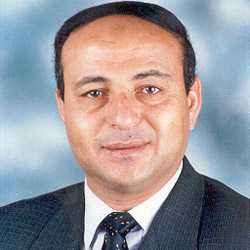 Editor-in-chief of the privately-owned Al-Masreyoon news network Mahmoud Sultan questioned the connection between the arrest of journalist Abdel Rahman Mohamed, a journalist at the national company for distribution, and the release of “corrupt” business tycoons.

Mohamed was arrested in his home in Gharbeya on Saturday in what was described by the Freedoms Committee of the Press Syndicate as “the return of dawn visitors”.

Mohamed is a prominent journalist who shed light on the corrupt business tycoons through a long series of investigative reports, Sultan told Daily News Egypt. “Some people are linking his arrest to the current pampering of the businessmen accused of corruption.”

Sultan said so far, there are no details about the reasons behind Mohamed’s arrest. However, it has been said that he is facing charges of belonging to a banned group: “I do not know what the prosecution based their accusations on. I guess it is based on malicious complaints.”.

Mohamed’s friends and colleagues were surprised by the arrest since he is known to be a professional journalist who does not have any political or ideological affiliations. “Abdel Rahman’s loyalty is to his job and nothing else,” his friends said, according to Sultan.

Mohamed is expected to be released in the next few days since they could not find any convincing evidence behind the accusations.

Head of the Freedoms Committee at the Press Syndicate Khaled El-Balshy previously told Daily News Egypt that the prosecution will detain Mohamed for 15 days, pending investigations. However, he said they would appeal the decision of his arrest on Wednesday.

Abdel Rahman was arrested on Saturday along with another journalist Sobhy Shoaib. The Prosecutor General, however, approved the release of Shoaib on the same day of the arrest.

The Freedoms Committee of the Press Syndicate called for the immediate release of Mohamed on Sunday, condemning the return of “dawn visitors” who arrested him and terrorised his family. The committee called for an investigation into the methods of arrest and the accountability of those responsible.