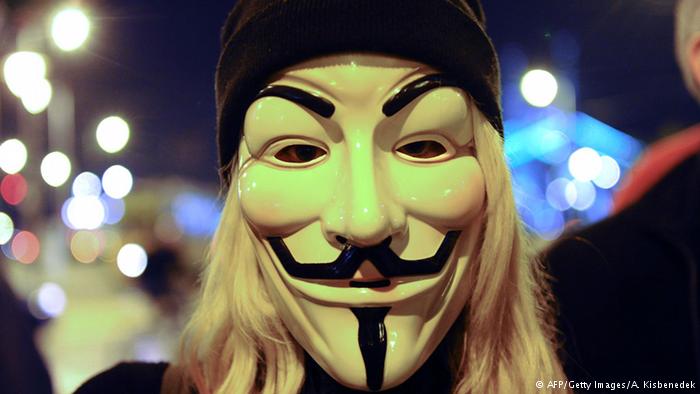 The international hacking network Anonymous has “declared war” on the “Islamic State” following Friday’s fatal attacks in Paris. Now the movement reports that more than 5500 Twitter accounts of ISIS are down.
They attack websites, crack servers and take down extremists’ social media accounts. In a video posted on YouTube# on Saturday, the hacktivist group Anonymous declared war against the “Islamic State.” A man wearing a Guy Fawkes mask describes the jihadist militant group as “vermin” and vows to hunt them down.

“We are going to launch the biggest operation ever against you. Expect many cyberattacks. War has been declared. Get ready,” the man said in French.

The promise to unleash waves of cyberattacks on the “Islamic State” (IS) came after the jihadi militants claimed responsibility for a series of bombings and shootings in Paris on Friday, in which 129 people died.

“These attacks cannot remain unpunished,” the man said, without elaborating on what the measures would involve.

On the specially-created Twitter account #OpParis (@opparisofficial), Anonymous reports that more than 5500 accounts of suspected IS fighters and supporters are now down.

A hacktivist in the United States has several Twitter accounts such as @CtrlSec, on which he sends out lists with the account names of suspected extremists. He then asks other users to report these accounts so that the short message service can check and block them faster.

Many of these accounts no longer exist. IS supporters frequently change their user names to avoid being banned from Twitter. Doing so, they keep followers and tweets. But when searching the former user name with the standard URL twitter.com/accountname, the browser shows an error message.

Even if the Anonymous collective uses a very martial vocabulary, they strongly criticize armed struggle:

Users on Twitter have reacted mainly positively to Anonymous’ “declaration of war.” Using the hashtag #OpParis, numerous users have called for a virtual struggle against the extremists.

Anonymous is an international network of activist computer hackers that has claimed responsibility for several cyberattacks against government, corporate and religious websites over the past 12 years.

Using the hashtag #OpISIS, the group made similar threats following the fatal attack on the satirical French weekly “Charlie Hebdo” in January. The short message service is an important propaganda platform for ISIS. A study of the Brookings Institution says that tens of thousands of IS fighters and supporters have used Twitter accounts to promote their message of hatred.

'We need to improve quality of our leaders in gov't,' says Rachid